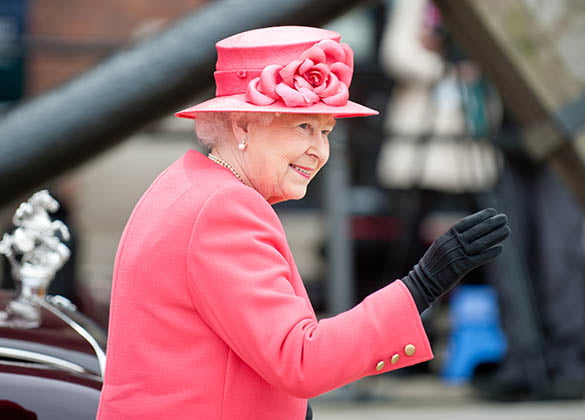 Born on 21 April 1926, Elizabeth Alexandra Mary was the oldest child of Prince Albert, Duke of York and Elizabeth, Duchess of York. Her sister, Princess Margaret Rose, was born in 1930. Third in line to the throne, with the title of Her Royal Highness Princess Elizabeth of York, there was no reason to believe that she would ever become Queen. But in 1937 when King Edward, her uncle, abdicated over his affair with the divorced American, Mrs Wallis Simpson, her father was suddenly thrust into the limelight, and was crowned King George VI. Elizabeth was tutored at home but, in order to avoid too sequestered a childhood, she became a Girl Guide - the 1st Buckingham Palace Company was formed so that she could socialise with girls her own age. Elizabeth had met her future husband Prince Philip of Greece and Denmark, when she was just eight years old.

When they met again, five years later, she fell in love with Philip, and they began to exchange letters. The royal family moved to Windsor Castle in 1940, where they spent most of the war years. The royal family were applauded for their refusal to ship their daughters away from the dangers of wartime London - in fact Elizabeth trained as a driver and mechanic, and drove a military truck in the Women’s Auxiliary Territorial Service. In 1947 Elizabeth married Prince Philip, who renounced his Greek and Danish titles, was created the Duke of Edinburgh and granted the style of His Royal Highness.

Although there were some reservations about Philip’s family links with German noblemen, the post-war austerity of the country was lifted by the wedding, which was seen as a glimmer of hope after the privations of the war years - true to the spirit of the day, Elizabeth had to collect clothing coupons for her wedding dress.

Her first son, Charles, was born on 14 November 1948, and a few weeks later the King issued letters patent, allowing her children to enjoy a royal and princely status to which they would not otherwise have been entitled. In early 1952, Elizabeth and Philip set out on a tour of Australia and New Zealand via Kenya. It was here that she heard the news of her father’s death. Elizabeth hastily returned home and, on 8 February, was proclaimed Queen. Her official coronation was not held until 2 June 1953, in Westminster Abbey. Watched by a worldwide television audience of 20 million, Elizabeth was crowned Queen, with much pomp and ceremony, in a specially commissioned Norman Hartnell gown.

Elizabeth has presided over a period of great transition. The post-war years saw the dismantling of the old British Empire, and the emergence of the British Commonwealth, a confederation of independent states around the world, which looked to The Queen as their nominal head. Over the past 50 years and more The Queen has been a tireless visitor to the countries of the Commonwealth, undertaking countless tours of each Commonwealth country – she is the most widely-travelled head of state in history.

In 2015 The Queen became the longest-serving British monarch, surpassing her great-great grandmother Queen Victoria, and 2017 marked her sapphire anniversary – 65 years on the throne. She celebrated her 90th birthday in 2016 and continues to fulfil a demanding schedule of public engagements. A full list of her charities and patronages can be found here.

Prince Philip died 9 April 2021 and his funeral was held at St George's Chapel at Windsor Castle.