Quick Links
TROOPING THE COLOUR
THE STATE OPENING OF PARLIAMENT
InvESTITURES
STATE VISITs AND STATE BANQUETS
The Queen lived her entire life in the public eye, but that scrutiny was particularly acute when she was conducting her ceremonial duties. The subject of millions of photographs and many hours of television footage, the Queen had to share the most intense personal moments of her life, marriages and funerals, with millions of onlookers. She was also the main player, sometimes crowned, robed and carrying a sceptre, in the drama, ritual and symbolism of a range of ceremonial state occasions, most notably her own coronation, but also the Opening of Parliament, Trooping the Colour and investitures. 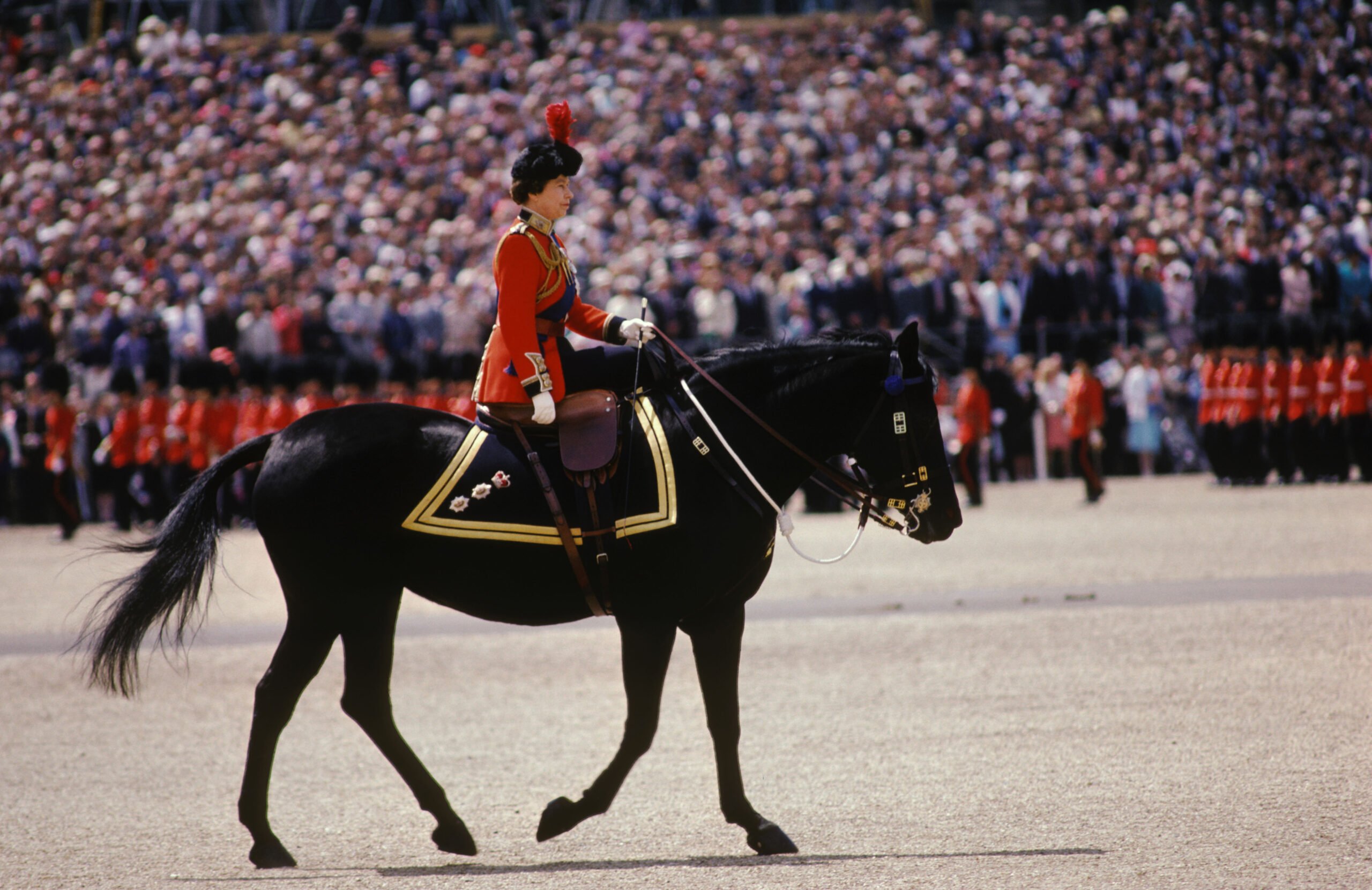 On the death of her father, Elizabeth II became Colonel-in-Chief of all the Guards Regiments and Corps of Royal Engineers, and Captain-General of the Royal Regiment of Artillery and the Honourable Artillery Company. She was also the head of the Army, Navy and Royal Air Force. Few ceremonies, however, brought home her close relationship to the armed forces so vividly as Trooping the Colour, also known as the Sovereign’s Birthday Parade.

This annual event, held every June, dates back to 1755. In a display of perfectly-honed ceremonial it allows the entire Household Division, composed of the Household Cavalry and five regiments of the Guards Division, to salute the sovereign on the occasion of their official birthday.

The Queen first took part in the ceremony, when it was her father who was being honoured, in 1949. As a young girl, she had mastered the difficult art of riding sidesaddle, and for 36 years she appeared, mounted, in the scarlet tunic of the regiment of Guards whose colour was being trooped, a blue riding skirt, riding boots, and a tricorn hat surmounted by the relevant regimental plume. After 1987 she attended the ceremony in a carriage.

Over 1,400 officers, 200 horses and 400 musicians are involved in the parade, and the regiments involved take it in turn to troop their ‘colour’, or regimental standard. This was once a vital battle preparation, ensuring soldiers recognised, and followed, the banner of their own regiment.

The parade route extends from Buckingham Palace along The Mall to Horse Guards Parade, Whitehall and back again. At 11am the Royal Procession arrives and the sovereign takes the Royal Salute. The parade begins with the Inspection, the sovereign driving slowly down the ranks of all eight Guards and then past the Household Cavalry.

THE STATE OPENING OF PARLIAMENT

Parliament’s annual state opening takes place every year, and additionally after a general election. The Queen was called upon to play a central, and majestic, role in a ceremony that is steeped in tradition and makes reference to the sometimes chequered relationship between the monarchy and the House of Commons.

Before the State Opening, the Yeomen of the Guard search the cellars of the Houses of Parliament, a tradition dating back to the Gunpowder Plot of 1605, when Guy Fawkes attempted to blow up Parliament. The Sovereign is driven in a state carriage from Buckingham Palace to the Palace of Westminster, preceded by the Imperial Crown, which travels in a separate carriage. The Sovereign then proceeded to the Robing Room, where she was dressed in the Robe of State. Preceded by the Sword of State and the Cap of Maintenance, the Queen progressed through Westminster Palace to the House of Lords, wearing her Crown and crimson parliamentary robe.

The official known as Black Rod is then sent to summon the Commons, and in an annual ritual the door to the Chamber is symbolically slammed in his face by the Serjeant at Arms to assert the Commons’ independence. The door is opened in response to three knocks with his ebony staff of office. The Speaker and the Serjeant at Arms, with mace in hand, then lead the Prime Minister and Leader of the Opposition with a deliberate lack of haste to the Lords’ Chamber. The speech, written by the Prime Minister and Cabinet and setting out plans for the coming Session, is then delivered by the Sovereign.

The Queen’s first State Opening of Parliament was in November 1952. She had acceded to the throne earlier that year, but had not been crowned. Dressed in a gold lace gown and wearing the purple velvet robe worn by the young Queen Victoria, she made a dignified debut, and addressed the nation in ‘clear and well-modulated’ tones. She was not, however, able to wear the Imperial State Crown, as this is an honour only accorded to the monarch after the coronation. 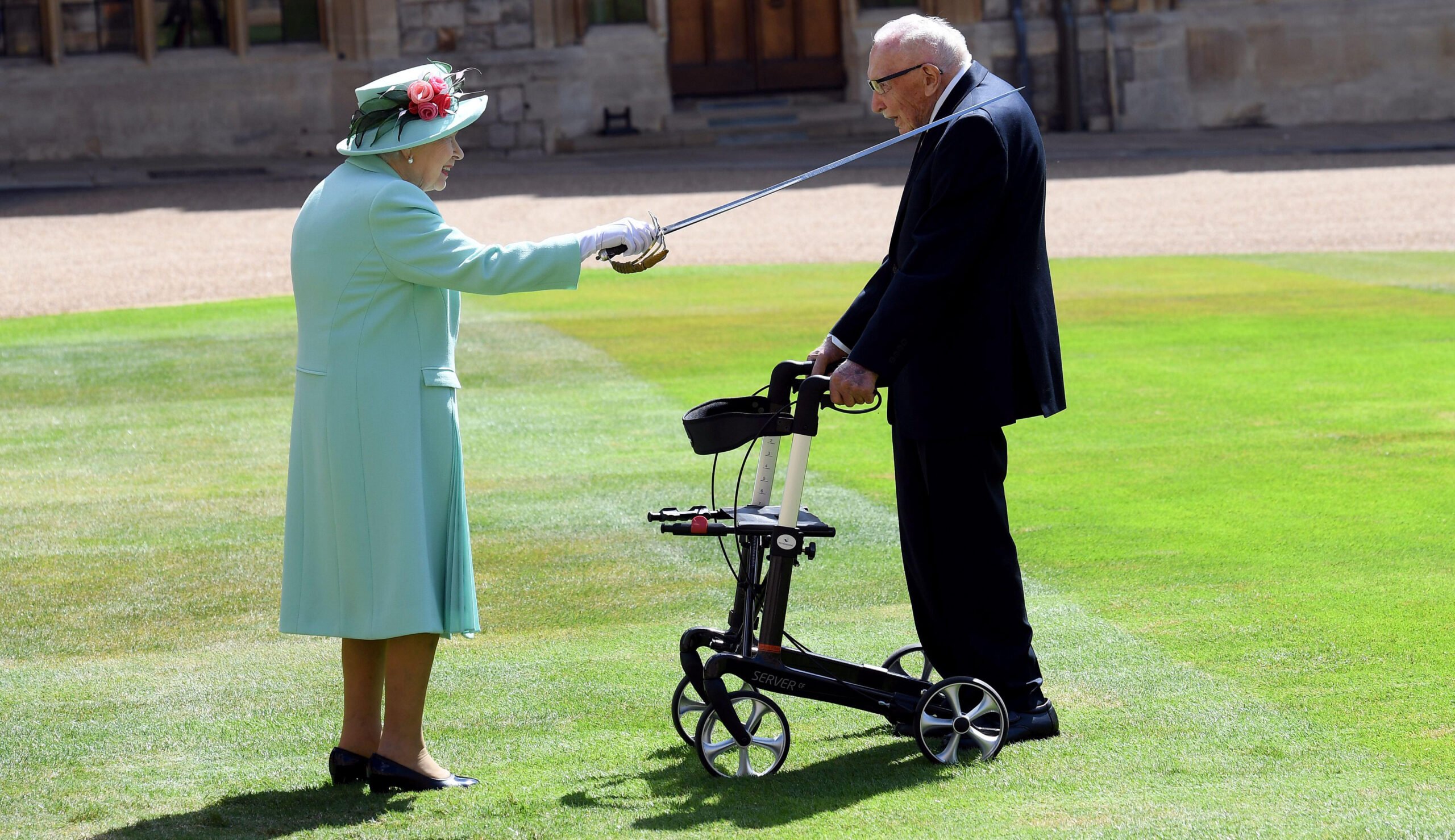 The Sovereign is known as ‘the fount of honour’ and, since feudal times, has conferred honours on his/her subjects.Today, honours may be awarded for gallantry, courage, outstanding achievement, or service to the community or the Crown. This was the moment when the Queen was able to meet, and congratulate, outstanding members of the public; she regarded investitures as the most enjoyable of her ceremonial duties.

Every year the New Year’s Honours List and the Birthday Honours List are announced in the London Gazette, and summonses are sent to the recipients requesting them to attend an investiture at Buckingham Palace. On average 14 investitures a year are held at Buckingham Palace, and once every five years an investiture is held at the Palace of Holyroodhouse in Scotland; around 2,600 people a year receive their award in person. The Sovereign or a senior member of the royal family – the Prince of Wales or Princess Royal – officiates. The Queen held her first investiture on 6 February 1952, shortly after her accession.

At Buckingham Palace investitures take place in the Ballroom, and about 135 people are invited to attend to receive their orders, decorations and medals. At the start of the ceremony the Sovereign enters the room flanked by two Gurkha orderly officers, a tradition instituted by Queen Victoria. On duty on the dais are five members of The Sovereign's Body Guard of the Yeomen of the Guard, which was created in 1485 by Henry VII; they are the oldest military corps in the United Kingdom. The Sovereign pins the decoration on the recipients; as each recipient steps up to receive the honour an equerry gives her a brief summary of his/her achievements. Those who are receiving a knighthood kneel on an investiture stool before the Sovereign and they use a sword to dub the knight – a ritual dating back to the Middle Ages.

The most prestigious honour is membership of the Most Noble Order of the Garter, which is restricted to 24 Knights Companion. Every June the Knights gather at Windsor Castle and the Sovereign invests any new Companions with the insignia (a broad riband worn over the shoulder, a star and a collar) at a Chapter of the Order in the Throne Room of Windsor Castle. This is followed by a luncheon hosted by the Sovereign and a procession through the wards of Windsor Castle to St. George’s Chapel. 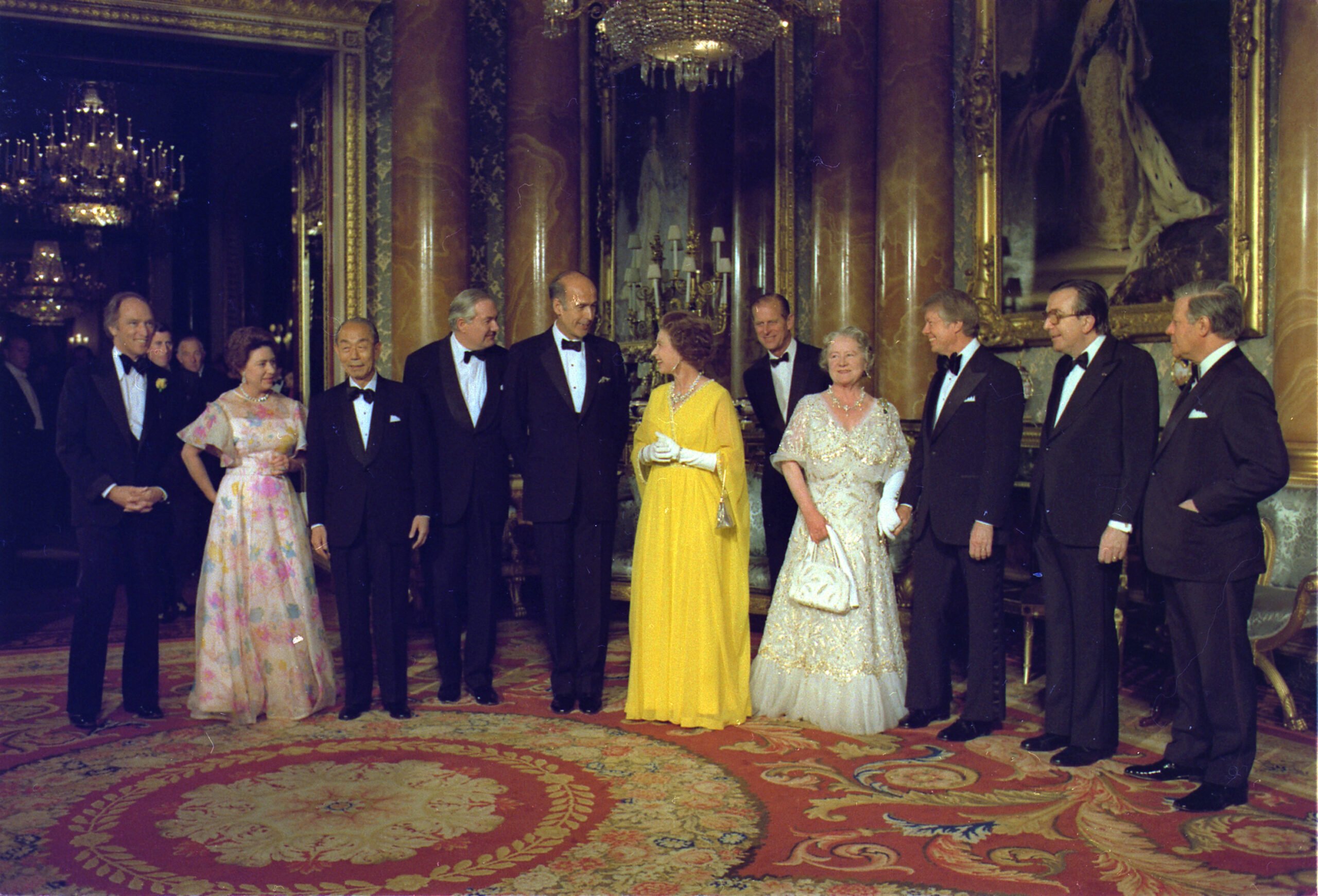 More than 50,000 visitors a year pass through Buckingham Palace as guests at banquets, lunches, dinners, receptions and garden parties. The Sovereign hosts state banquets on the first day of state visits. These take place in the Ballroom at Buckingham Palace, which opened in 1856 with a ball to celebrate the end of the Crimean War, or at Windsor Castle.

Around 170 guests are invited to state banquets, which follow a formula that dates to the reign of Queen Victoria. Guests are first received by the Sovereign and the visiting head of state in the Palace’s Music Room, before joining a procession, led by the Lord Chamberlain and Lord Steward, to the Ballroom. Before the meal commences, the Sovereign proposes a toast to the guest, who reciprocates. Throughout the meal there is a musical accompaniment, provided by a military orchestra in the gallery, and at the end of the meal, pipers process around the room. The guests then move to the State Dining Room and the Blue Drawing Room for coffee.

The planning for a state banquet begins six months before the event. Preparations include polishing 1,000 glasses, folding around 170 napkins and creating 20 flower displays. The Queen took a close interest in all aspects of planning. 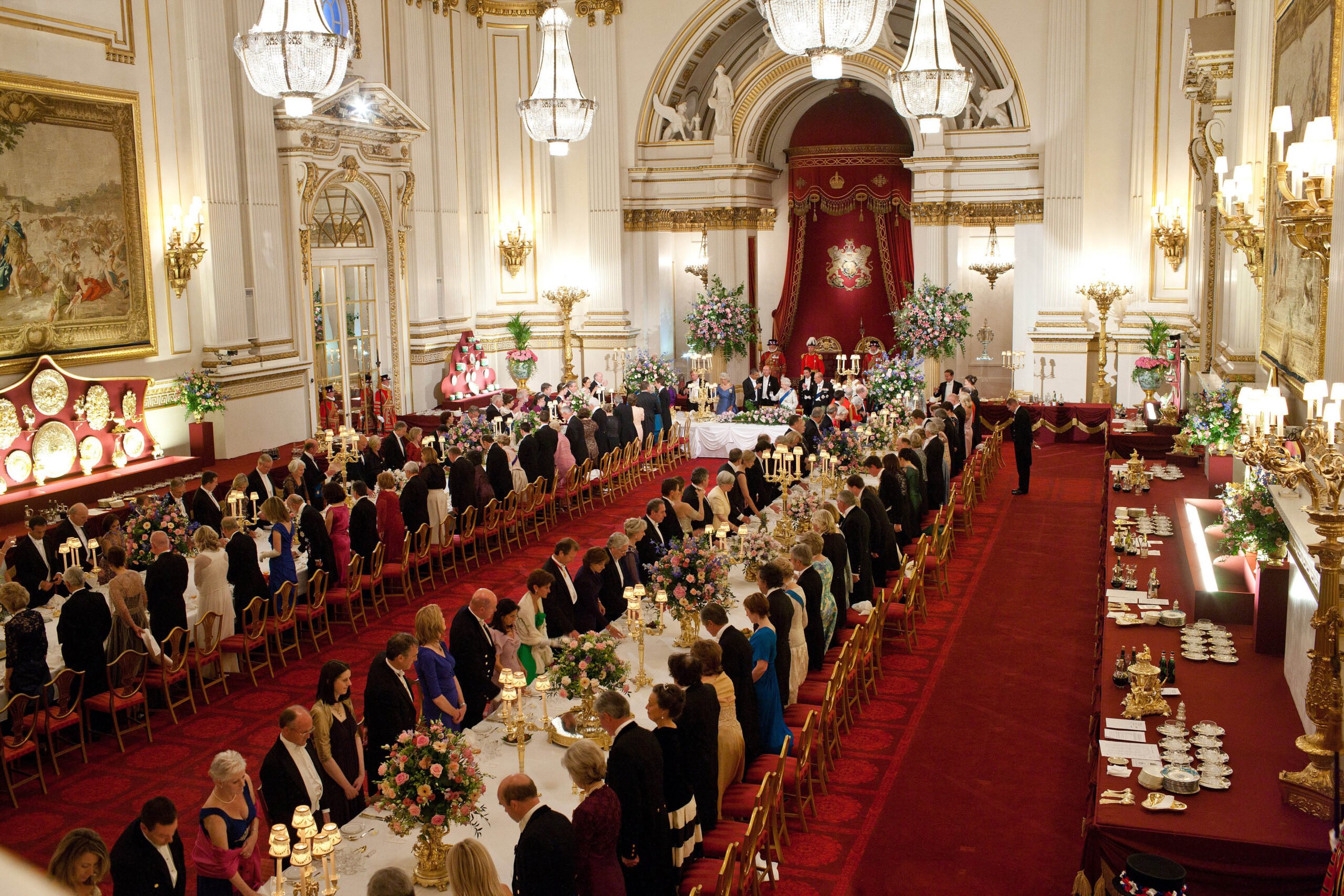