Quick Links
PRIME MINISTERS' MEETINGS
WALKABOUTS
CHARITY PATRON
LAUNCHES AND OPENINGS
GARDEN PARTIES
SPEECHES
Queen Elizabeth’s life was lived in the public view, and nowhere was this more apparent than in the relentless annual round of state banquets, charity galas, command performances and garden parties. Yet, despite the formality of these carefully orchestrated occasions, the Queen made personal contact with everyone she met, from the heads of state that attended the royal banquets and the prime ministers she met weekly throughout her reign to the ordinary people who greeted her on walkabouts, lined up to meet her at charity galas, or enjoyed her hospitality at Buckingham Palace.

Although the Queen was a constitutional monarch, and therefore politically neutral, she nevertheless gave a weekly audience to the prime minister, at which she had a right and a duty to express her views on Government matters.

The Queen also played a role in the mechanics of calling a general election when the prime minister must request the sovereign to grant a dissolution of Parliament. After the election the appointment of the prime minister is also the prerogative of the sovereign – constitutional conventions dictate that this is a person who commands the confidence of the House of Commons, normally the leader of the party with an overall majority.

A Succession of Prime Ministers

The Queen’s first prime minister, Winston Churchill, was undoubtedly one of her favourites. He became a father figure to the new Queen, but was also deferential and courteous. He visited her in Balmoral during the first year of her reign, where he got to know her well. For the Queen, Churchill was a monumental British figure, a towering wartime leader and defender of the British Empire. She was captivated by his erudition, grasp of history and sense of humour; they also shared a passion for horse-racing.

More surprisingly, the Queen also formed a close friendship with the Labour leader, Harold Wilson. Despite the fact that they had very little in common, the two shared a rapport. Wilson was warm-hearted, witty and communicative, and helped to make her feel in touch with her people. Audiences that normally lasted 30 minutes extended to two hours. Harold Wilson commented: “You realise very quickly that she is a unique repository of knowledge... and what emerges is a combination of experience, very hard work, a good memory and good judgement – both about things and about people.”

Plunging unexpectedly into a crowd of Great War veterans, King George VI and Queen Elizabeth were the first royals to engage in a ‘walkabout’ in May 1939 on a visit to Ottawa, in Canada. As they shook hands and chatted with thrilled old soldiers, they had set a precedent, but it was over 30 years before the practice of moving through crowds and engaging spontaneously with ordinary people became the royal norm.

The first planned ‘royal walkabout’ took place during the visit by the Queen and the Duke of Edinburgh to Australia and New Zealand in 1970. The practice was introduced to allow them to meet a greater number of people, not simply officials and dignitaries.

Members of the public love royal walkabouts because they appear to be impromptu, a departure from the carefully scripted and choreographed itinerary. They are able to exchange words with the sovereign and have their photographs taken. Security personnel and ladies-in-waiting followed closely in the Queen’s footsteps, ready to step in if danger threatened, or at the very least take charge of the growing armfuls of flowers and gifts that were presented to her. 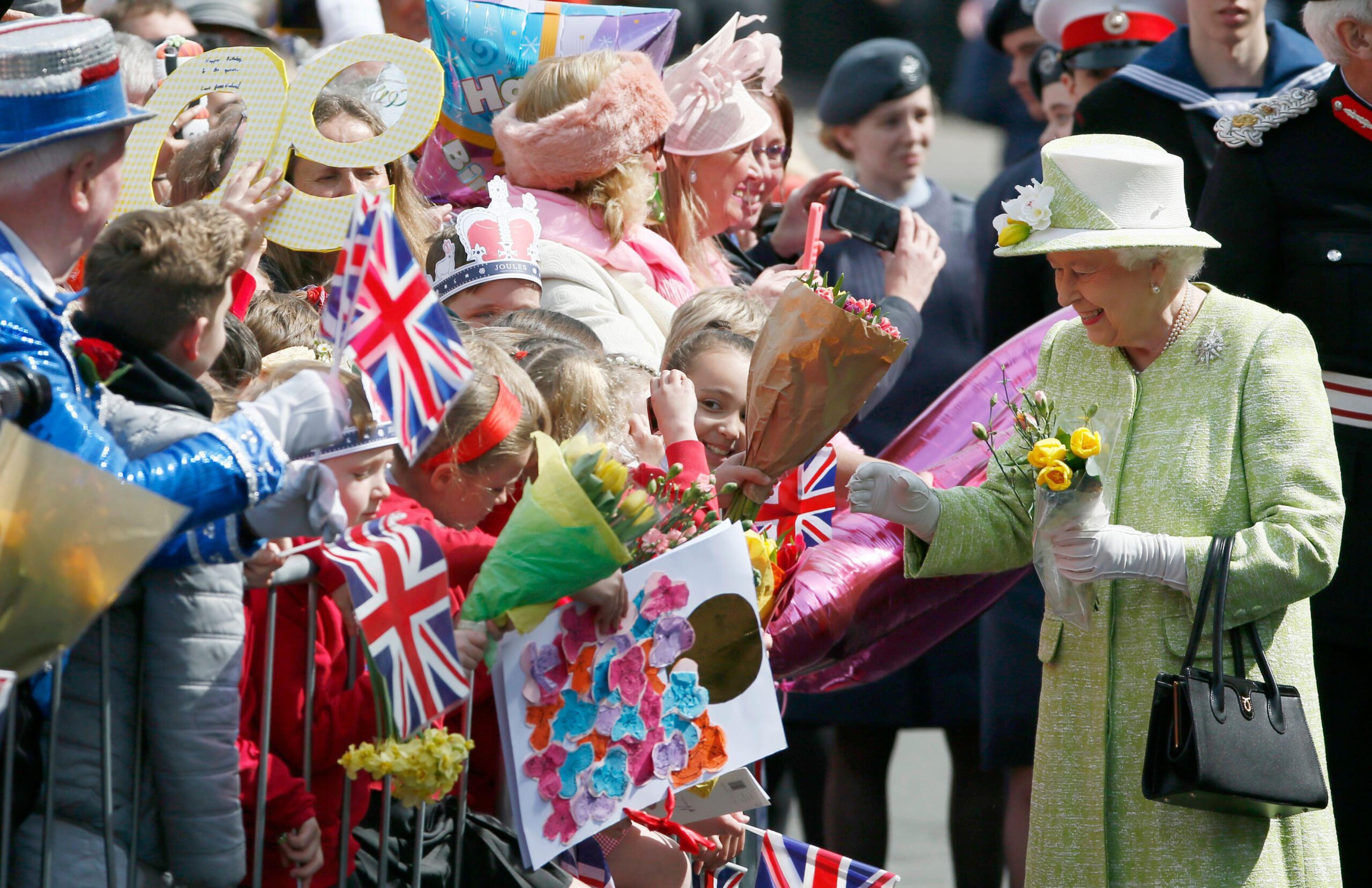 Members of the Royal family have lent their names to organisations through formal patronages since the 18th century. The first recorded patronage was George II’s involvement with the Society of Antiquaries, an organisation concerned with architectural and art history and conservation.

The Queen was patron of over 600 charities; the royal family between them lend their support to some 3,000. Patronages of many of the Queen’s charities were inherited from George VI on Elizabeth’s accession to the throne. Her patronage was lent to a wide range of organisations, from hospitals, including the Queen Elizabeth Hospital for Children, to animal charities, including the RSPCA, Battersea Dogs Home and the Kennel Club, to campaigning charities, such as the Campaign to Protect Rural England. She was also the patron of many educational institutions, including the aptly named Queens’ College in Cambridge.

On her Golden Jubilee, the Queen asked that people wishing to commemorate the occasion made a contribution to five of her favourite charities: Barnardo’s, CRUSE Bereavement Services, I CAN (helping children with speech and language difficulties), the Royal Agricultural Benevolent Institution, and the Soldier, Sailors, Airmen and Families Association.

In 2002 the Queen even took the unusual step of writing a foreword to the “tempting array of recipes” in an Indian cookery book, published in support of another charity for which she was patron, Cancer Research UK. She was said to be a fan of Indian food.

A royal charity patron will help immeasurably with attracting funds, as well as keeping volunteers – the bedrock of any charity – happy. Royal patrons are no longer passive figureheads; since the 1980s they have become much more involved in the business of running the charity, and have taken a very active part in fund-raising and public awareness drives. When the Queen was invited to preside at a charity gala, fund-raising dinner, prize-giving or grand opening, the public would flock in, there would be coverage in the media, and donations would multiply. The impact of the Queen’s patronage was incalculable.

Royal Command performances are the highlight of many performers’ year, the chance to showcase their talents in front of a royal audience, with all the media coverage and positive publicity that inevitably follows.

Queen Elizabeth attended the Royal Variety Performance since her childhood and the proceeds of the performance are donated to the Entertainment Artistes’ Benevolent Fund, which cares for hundreds of entertainers throughout the UK who need help and assistance as a result of old age, ill-health, or hard times. She witnessed performances from an extraordinary range of performers, from Gracie Fields, Arthur Askey and Morecambe & Wise to Bette Midler, Whoopi Goldberg and Lady Gaga.

The Royal Film performance dates back to 1896 when the Prince of Wales and 40 royal guests watched a number of short films. The current run of Royal Film Performances in aid of the CTBF (Cinematograph Television Benevolent Fund) began in 1946 when King George VI, as Patron, and Queen Elizabeth took their daughters to see David Niven and Marius Goring in A Matter of Life and Death.

The Queen added lustre to ship launches, ribbon-cuttings and unveilings throughout her long reign.

Ship launches, with their attendant brass bands, champagne bottles and festive celebrations, were very much part of the Queen’s history. She watched, in 1938, as her mother launched the original Cunard liner Queen Elizabeth. The microphone her mother was using broke down, so the crowd did not hear her announcement, which was drowned out by the sound of the huge ship thundering down the slipway.

Princess Elizabeth launched her first ship, HMS Vanguard, in November 1944, aged just 18. She went on to launch four Cunard ocean liners: Caronia in 1947 (her last public engagement before her marriage); Queen Elizabeth 2 in 1967; Queen Mary 2 in 2004 and Queen Elizabeth in 2010.

Legend has it that the original intention in 1967 was simply to name the new liner Queen Elizabeth. The name was handed to the Queen in a sealed envelope, and it was traditional to add the name to the ship’s bow after the ceremony. The Queen did not read the contents of the envelope and announced “I name this ship Queen Elizabeth the Second. May God bless her and all who sail in her.” So the ship was effectively christened Queen Elizabeth 2 (QE2) and became the most famous Cunard liner.

As with ship launchings, these ceremonial occasions provide a highly photogenic moment and add the royal imprimatur and seal of approval to public achievements, artistic endeavours, new constructions and new inventions.

In 2009 there was a much more personal moment when the Queen unveiled a statue of the Queen Mother, by the sculptor Philip Jackson, which stands just off The Mall in central London, next to a statue of her father King George VI. This was a historic moment as it was the first statue of a royal consort in London for over a century. The national memorial was funded by the sale of a special £5 coin to commemorate the Queen’s 80th birthday in 2007.

The invitees are individuals who are deemed to be making a special contribution to the people and communities of the United Kingdom, and represent a cross-section of British society. In some years, for example on the occasion of the 50th anniverary of the National Health Service, additional garden parties are held.

After the playing of the National Anthem, the Queen and the Duke of Edinburgh circulated amongst their guests, each taking a different route. Random presentations were made so that everyone had an equal chance of speaking to Her Majesty and members of her family. Further guests were invited to join their hosts in the Royal Tea Tent.

Inevitably, the Queen was called upon to make a great many public speeches. She was not a natural public speaker, and was always most comfortable reading speeches from notes. Most of her speeches were prepared by private secretaries, and she then reviewed the draft and consulted with the Duke of Edinburgh about alterations and amendments. In general, her tendency was to downplay florid language – she was a very honest woman who did not want to convey sentiments she did not feel.

The Queen’s downbeat approach to public speaking came into its own when she made her annual speech at the State Opening of Parliament. Bespectacled, and reading without emotion from notes, she managed to convey complete neutrality about the upcoming programme of legislation, as befits a constitutional monarch.

The Queen’s Christmas broadcasts were the one occasion when she spoke more clearly with her own voice. They usually had a strong Christian framework, and drew on her own experiences and concerns. Her loyalty to her own armed forces and the Commonwealth, as well as her concern for the environment, were frequent themes that she explored in these seasonal broadcasts.

Nevertheless, some of the Queen’s speeches marked major milestones. Her 21st birthday speech, in April 1947, was delivered on tour in South Africa, and was a genuinely heartfelt avowal of her loyalty and commitment to her people and to the Commonwealth: “I can make my solemn act of dedication with a whole Empire listening. I should like to make that dedication now.”

When Princess Diana died in a car crash, the public felt the royal family were not displaying appropriate emotion. The Queen made a moving speech on the occasion which turned the tide of opinion: “In good times and bad, she never lost her capacity to smile and laugh, nor to inspire others with her warmth and kindness."