Quick Links
THE COMMONWEALTH AND BEYOND
A GLOBAL ODYSSEY
ROYAL CELEBRITIES
ANNIVERSARIES AND DIPLOMACY
The Queen has probably made more visits to other countries and experienced more state banquets, handshakes, entertainments, troop inspections, national anthems and the like than any other head of state. Her schedule of royal tours of Commonwealth countries and state visits to foreign nations began just after her ascent to the throne in 1952 and has continued to the present day. Nor have her trips been merely ornamental: behind many of them has lain serious diplomacy, from repairing the diplomatic damage caused by the Suez Crisis in 1956 to restoring political confidence and maintaining the momentum of the Peace Process on her state visit to the Republic of Ireland in 2011. 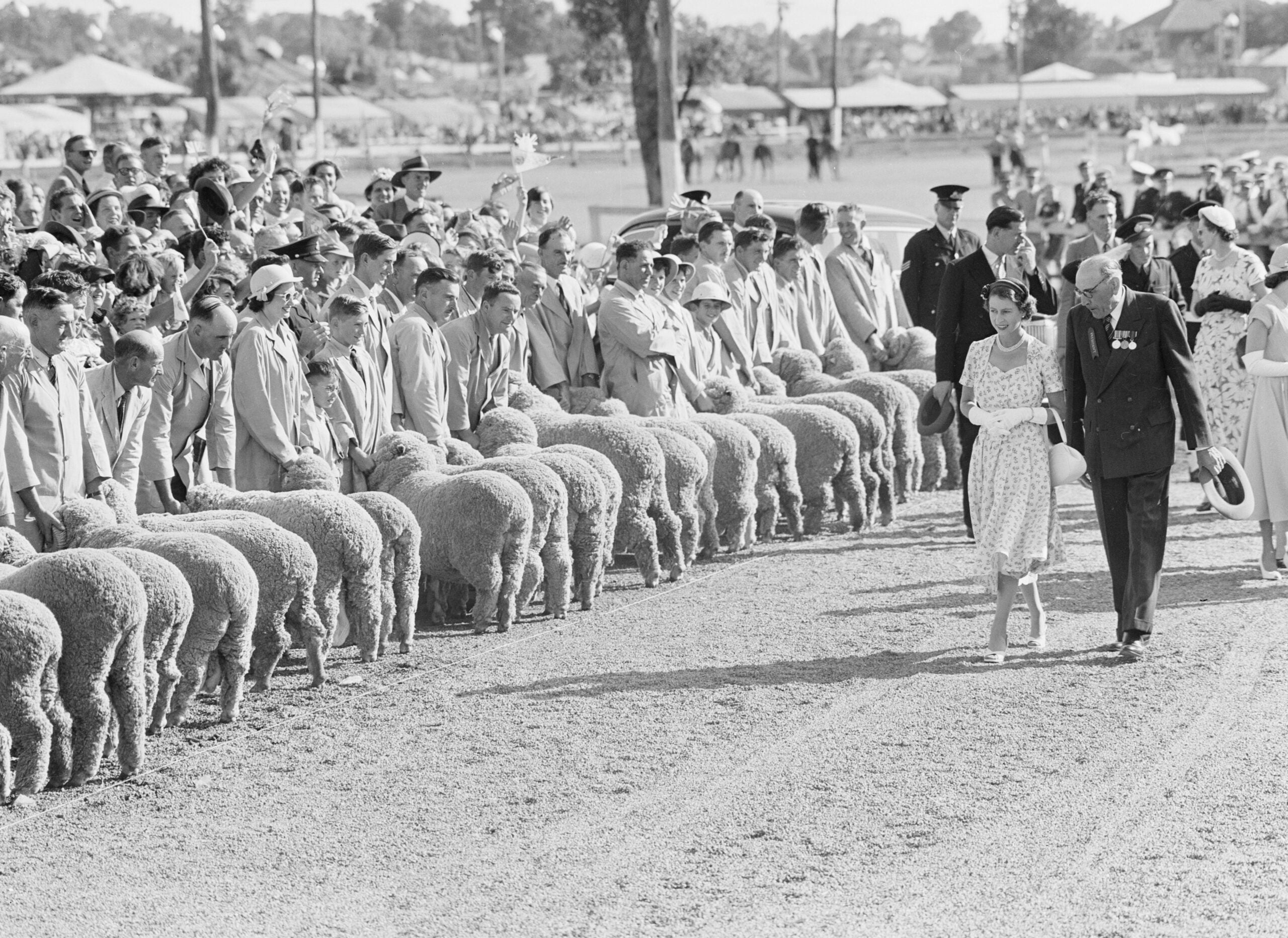 THE COMMONWEALTH AND BEYOND

In November 1953 – only a few months after the nation had been putting up bunting and organising street parties for her coronation – Queen Elizabeth set out on the most ambitious tour of the Commonwealth ever taken. It lasted almost half a year, covered 43,618 miles and included visits to a dozen countries, from Bermuda and the Coco Islands to New Zealand and Australia.

The Queen and Prince Philip first flew to the Caribbean where, in Jamaica, they boarded HMS Gothic, their floating home for most of the trip. They sailed through the Panama Canal to Fiji and Tonga, where one of the exhibits on show was a giant turtle said to have been alive in the days of Captain Cook. The royal couple arrived in New Zealand on 23rd December, and the Queen made the traditional royal Christmas broadcast from Auckland. The couple spent four weeks in the land of the ‘long white cloud’ before enjoying a two-month stay in Australia, where an estimated three-quarters of the population greeted them with wild enthusiasm. The return journey included stops at Ceylon (Sri Lanka), Aden, Uganda, Malta and Gibraltar, from where they sailed to London on the new Royal Yacht Britannia, launched the previous year.

In 1955 the Queen was back on the royal road, this time to Norway, then in the following year she made a state visit to Nigeria, the largest of Britain’s African colonies. The trip ended in the capital of Lagos with a spectacular dance of thousands of masked warriors.

Paris in the spring beckoned in 1957, where the Queen and the Duke met President René Coty. Highlights included a boat ride along the Seine, a banquet in Versailles and an inspection of a car factory and the Venus de Milo. The Queen was the first British monarch to visit France since Queen Victoria in 1855 and was greeted by rapturous crowds. She did much to rebuild Britain’s friendship with France after the fiasco of the Suez Crisis the year before – as she did when she visited the USA in October 1957.

The Queen and Prince Philip returned to North America in June 1959, by which time the Queen was pregnant with her third child, the future Prince Andrew. The royal couple spent six weeks in Canada, visiting every province and territory, and made a fleeting visit to Chicago. The first seven years of her reign had taken her to all parts of the globe.

The 1960s – the decade of pop culture, hippies, the Vietnam War and widespread student unrest – provided a less certain backdrop to the Queen’s visits and tours. These were still made with impeccable orchestration and received with enthusiasm, whether in the Antipodes in 1963, the Caribbean in 1966 or Brazil and Chile in 1968, but notes of dissent crept in. The royal couple were criticised at home for participating in a tiger hunt in India in 1961, and in 1964 the Queen found herself being booed in Quebec City by Quebec separatists.

Nevertheless, the royal couple continued to charm and impress their hosts. The Duke played polo in Lahore during the visit to the Indian sub-continent, while the Queen gamely rode on an elephant. Later in 1961 they visited Ghana, Sierra Leone and the Gambia. There they acknowledged Britain’s role in African history by inspecting the ruins of James Island – a former British fort and slave port.

But arguably the most successful visit in the 1960s was that to West Germany in 1965. In Berlin, huge crowds cheered the Queen and chanted “Elisabet, Elisabet”. She planted a tree hoping that “this one will be symbolic of a new chapter of understanding and co-operation between our two countries.” 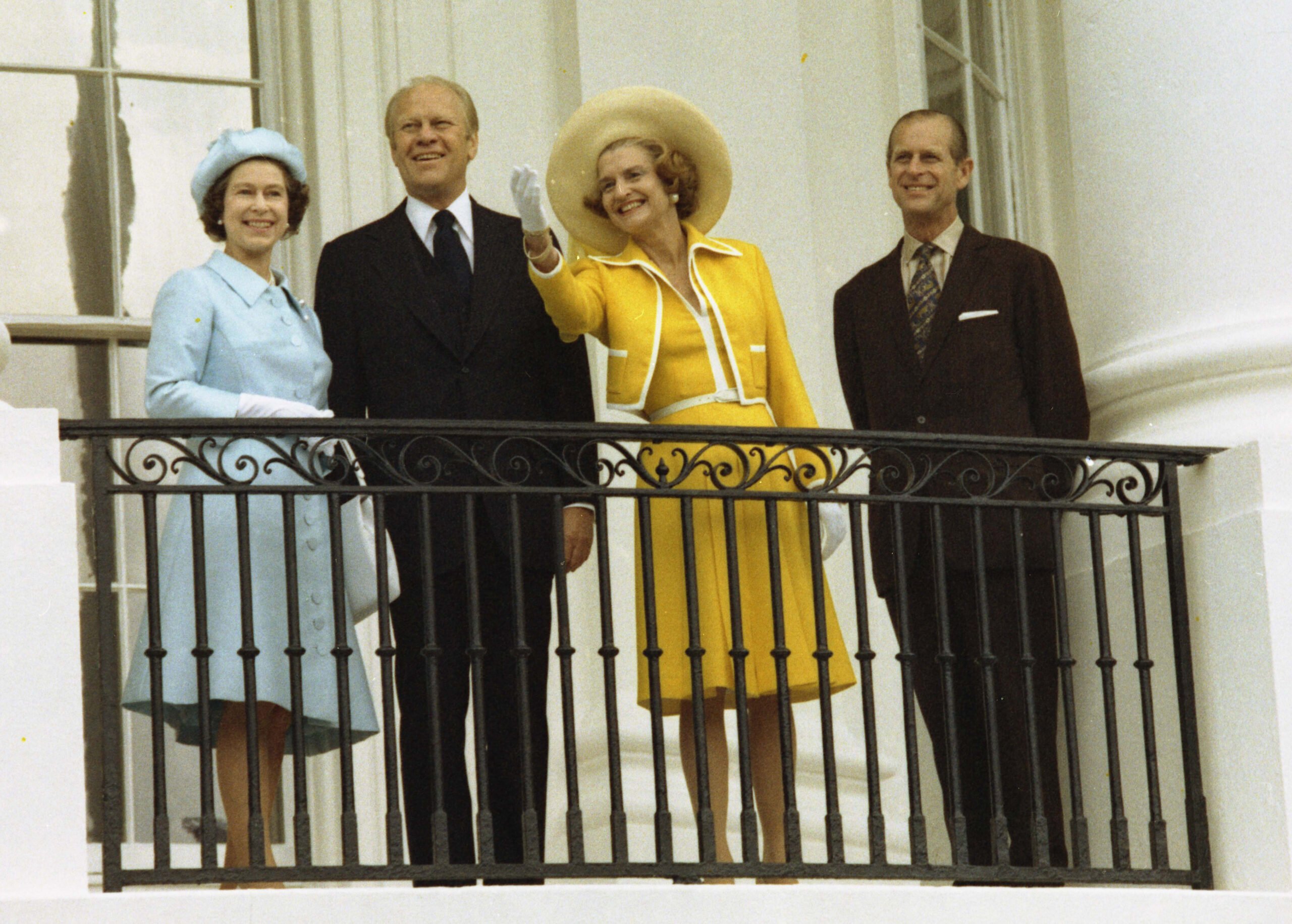 The 1970s  were a demanding time for both the Queen and Prince Philip, taking them all over the world. They were happy to be able to introduce a new generation of the royal family, represented by Princes Charles and Princess Anne,  to the world stage.

With its litany of miners’ strikes, electricity cuts, the three-day working week, soaring oil prices and roaring inflation, the 1970s was one of the most turbulent decades of recent British history. Amid the doom and gloom, however, the Queen’s Silver Jubilee in 1977 temporarily lit up the nation and celebrations took place throughout Britain and the Commonwealth. During that year, the Queen and Prince Philip travelled an estimated 56,000 miles, from the Antipodes to the Caribbean, and were greeted by cheering, flag-waving crowds everywhere. She made her last stop in Barbados, where, two years previously, she had knighted the great West Indian cricketer Gary Sobers at the crowded Garrison Savannah racecourse.

If 1977 was the most demanding – and rewarding – period for royal visits abroad, the other years of the decade also proved to be busy for the Queen and the Duke. In early 1972, for example, the royal couple and Princess Anne, then 21 years old, travelled to Singapore and Malaysia. In May of the same year the Queen, the Duke and Prince Charles visited France, which gave the Queen the chance to pay her respects to her terminally-ill uncle, the Duke of Windsor, who as Edward VIII had abdicated from the throne in 1936.

In February 1975 the Queen visited Mexico, where she absorbed some of the country’s ancient Maya culture at the ruined city of Uxmal. Then in May she was off to Japan, paying her respects to Emperor Hirohito and visiting the cities of Tokyo, Osaka, Ise and Kyoto. In the following year she and Prince Philip crossed the Atlantic to join in the United States’ bicentennial celebrations. Their packed six-day tour included a visit to Monticello, the home of Thomas Jefferson, principal author of the Declaration of Independence and a moving force behind wresting America away from the royal authority of the Queen’s ancestor, King George III.

Arguably the most important state visit of the decade, however, came in February 1979, when the Queen travelled to the oil-producing nations of Kuwait, Bahrain, Saudi Arabia, Qatar, the United Arab Emirates and Oman. The price of oil had been a key factor in Britain’s industrial turmoil during the decade and it was hoped that the royal tour would strengthen Anglo-Arab relationships. The Queen already knew a few of the Gulf States’ rulers through the world of horse breeding and racing, and both she and the Duke seemed genuinely interested in the entertainments laid on for them, from sword dances to camel racing. To the relief of the UK government, the trip was a great success. 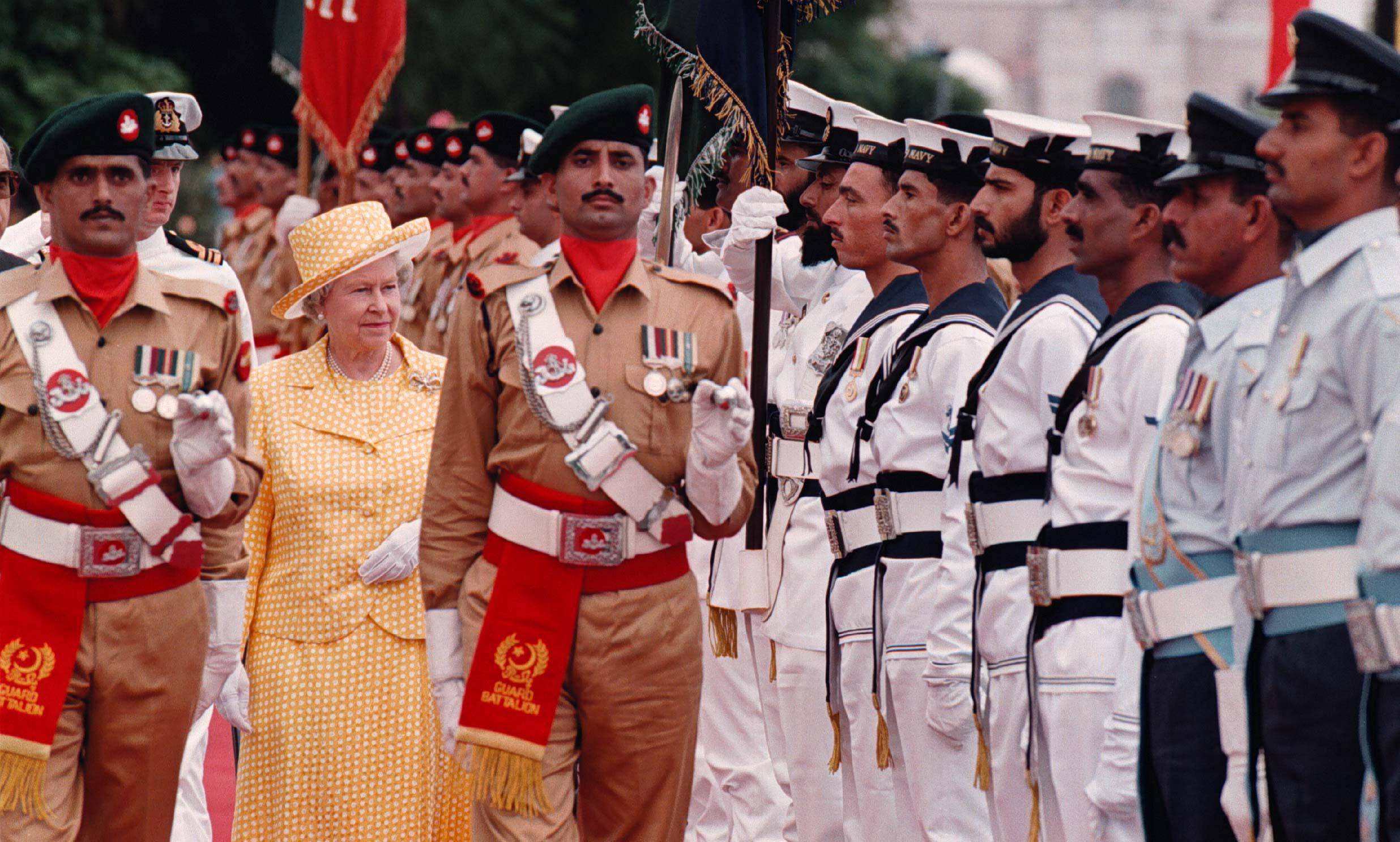 Despite the formality and protocol of the royal tours in the 1980 and 1990s, the world of royalty was merging with the world of celebrity. In California in 1983 more than 3,000 journalists from around the world gathered to report the royal visit, which included a trip to President Ronald Reagan’s ranch and a banquet at which Frank Sinatra entertained the Queen.

The Queen’s travels abroad continued to reflect the politics of the time. The autumn Commonwealth tour in 1982, for example, which included Australia and Papua New Guinea, was lightened by the euphoria in Britain after victory in the Falklands war in the spring. The same feel-good factor fed into the Queen’s visit to the USA in February 1983, although the Anglo-America bonhomie was severely tested later on in the year, when US troops invaded the Commonwealth country of Grenada in the Caribbean.

Twice in the decade the Queen broke new ground. In 1980 she became the first British sovereign and head of the Church of England to make a state visit to the Vatican, where she had private talks with Pope John Paul II. Then in 1986 she became the first British monarch ever to visit China, bringing a rarely-seen royal glitter to the Land of the Dragon.

The 1990s saw a great deal of political turbulence in Europe after the end of the Cold War, and state visits by the Queen helped to forge better UK relations with some of the countries experiencing extraordinary change, including Russia and a reunified Germany. The Queen and Prince Philip visited the latter in 1992 and received a mixed reception.

Two years later, in 1994, the royal couple travelled to Russia to meet President Boris Yeltsin, who hoped the visit would be seen as an endorsement of his pro-democracy policies. The crowds on the streets were curious and friendly, and the two British royals tactfully avoided any reference to the Bolshevik murder of Czar Nicholas II and his family, to whom they were both distantly related. “You can’t condemn a whole nation for what a few extremists do or did,” the Prince told one UK reporter.

Another country that had emerged from political turbulence was the new post-apartheid South Africa, and the Queen was welcomed there in March 1995 by President Nelson Mandela. It was the first time she had visited since 1947, when she had celebrated her 21st birthday. Delighted township crowds waved banners saying “Thank you for coming back”. 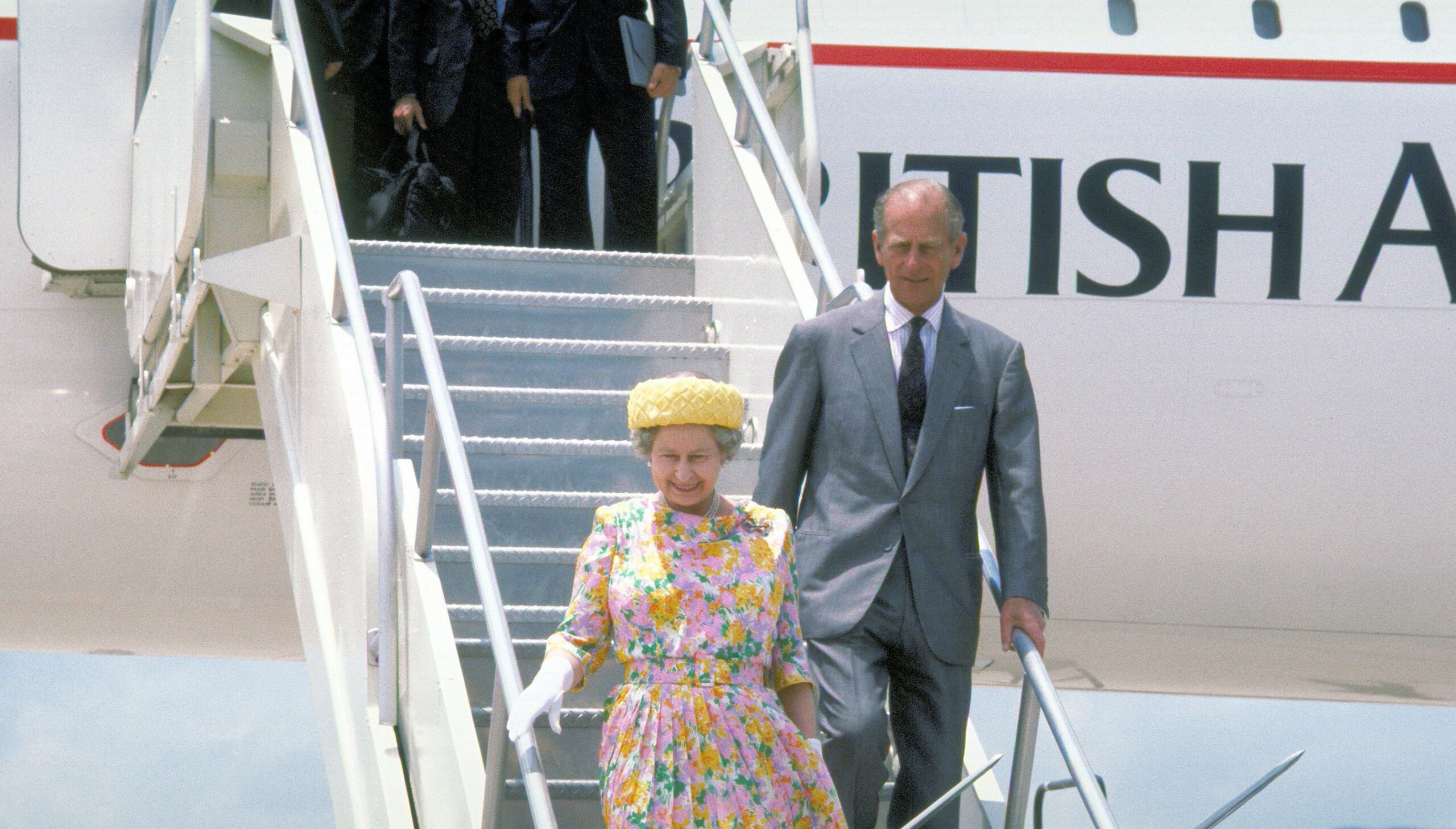 In the fifth decade of her reign, the Queen – still fit and full of stamina despite her advancing years – kept up her demanding schedule of overseas visits.

The highlight of the first half of the Noughties was the 2002 tour of Commonwealth realms, carried out as part of the Queen’s Golden Jubilee celebrations. Later on in the decade, in 2007, the Queen and Prince Philip marked two 400th anniversaries. The first was that of the English Church in Amsterdam, founded in 1607 to serve the city’s English-speaking population. The second was the settlement of Jamestown in Virginia, USA. In October of the same year the Queen made a historic trip to Slovenia and Slovakia, becoming the first British monarch to visit those countries.

The most groundbreaking visit of the decade occurred in May 2011, when the Queen and Prince Philip flew to the Republic of Ireland, the first visit by a British monarch since the country gained its independence in 1922. The trip was intended to promote Anglo-Irish friendship and support the Peace Process in Northern Ireland. It was a resounding success. The Queen paid her respects to Irish republican heroes in Dublin’s Garden of Remembrance and even spoke a few words of Irish at a state banquet – prompting the Irish President Mary McAleese to utter “Wow” three times.

The Queen carried on making state visits (to the Vatican City, France and Germany) until 2015, when she fully passed on the mantle to the younger members of her family.