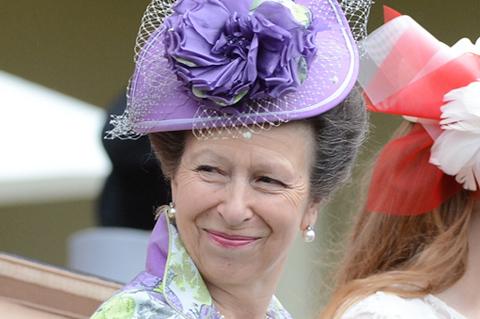 The only daughter of The Queen and Prince Philip, Anne Elizabeth Alice Louise was born on 15 August 1950.

Anne, the second child of The Queen, was given the title of princess and style of Royal Highness. Before 1948 these titles would have customarily been conferred on male-line children and grandchildren of the Sovereign.

Anne, unlike her three brothers, was educated privately at Buckingham Palace until she was 13 years old. She then attended Benenden School, graduating five years later with six O-levels and two A-levels.

A passionate and accomplished horsewoman, Anne won the individual title at the European Eventing Championship on Doublet when she was just 21 and was voted Sports Personality of the Year. She became part of the British eventing team, competing in international championships and in 1976 took part in the Montreal Olympics, riding the Queen's horse, Goodwill.

On 5 February 1987, Anne appeared as a panellist on the 200th edition of the BBC TV panel game 'A Question of Sport', becoming the first British royal to appear as a contestant on a TV quiz show.

On 14 November 1973, Anne married Mark Philips, a lieutenant in The 1st Queen's Dragoon Guards in Westminster Abbey. The ceremony was televised, attracting worldwide audiences of 100 million.

Although The Queen had, as was customary, offered her new son-in-law the title of Earl, it was turned down. Anne's two children, Peter (born 1977) and Zara (born 1981) therefore became the first grandchildren of a Sovereign to bear no title.

In 1974, Anne and her husband were returning home from a charity event and were forced to stop by a Ford Escort. The driver, Ian Ball, planned to kidnap the princess at gunpoint and hold her for ransom, an attempt that was stoutly resisted by her personal police officer, chauffeur and various passers-by. Anne kept a cool head throughout the attack, the nearest anyone has come in modern times to kidnapping a member of the royal family.

In 1989, Princess Anne and Captain Mark Philips, whose marriage had been under strain for some years, announced their separation. They were divorced in 1992. On 12 December 1992, Anne married Timothy Laurence, then a commander in the Royal Navy who later rose to become an admiral. They were married at Crathie Kirk, near Balmoral Castle, in Scotland, choosing to marry north of the border because the Church of England did not allow divorced people to remarry in its churches.

Anne is popular and hard-working, carrying out over 700 engagements a year, more than any member of the Royal Family. She is involved with over 200 charities and organisations, and has been the president of Save the Children since 1970. She is closely associated with the work of St John's Ambulance and is a British representative on the International Olympic Committee.