The Genealogy of Books

The Genealogy of Books 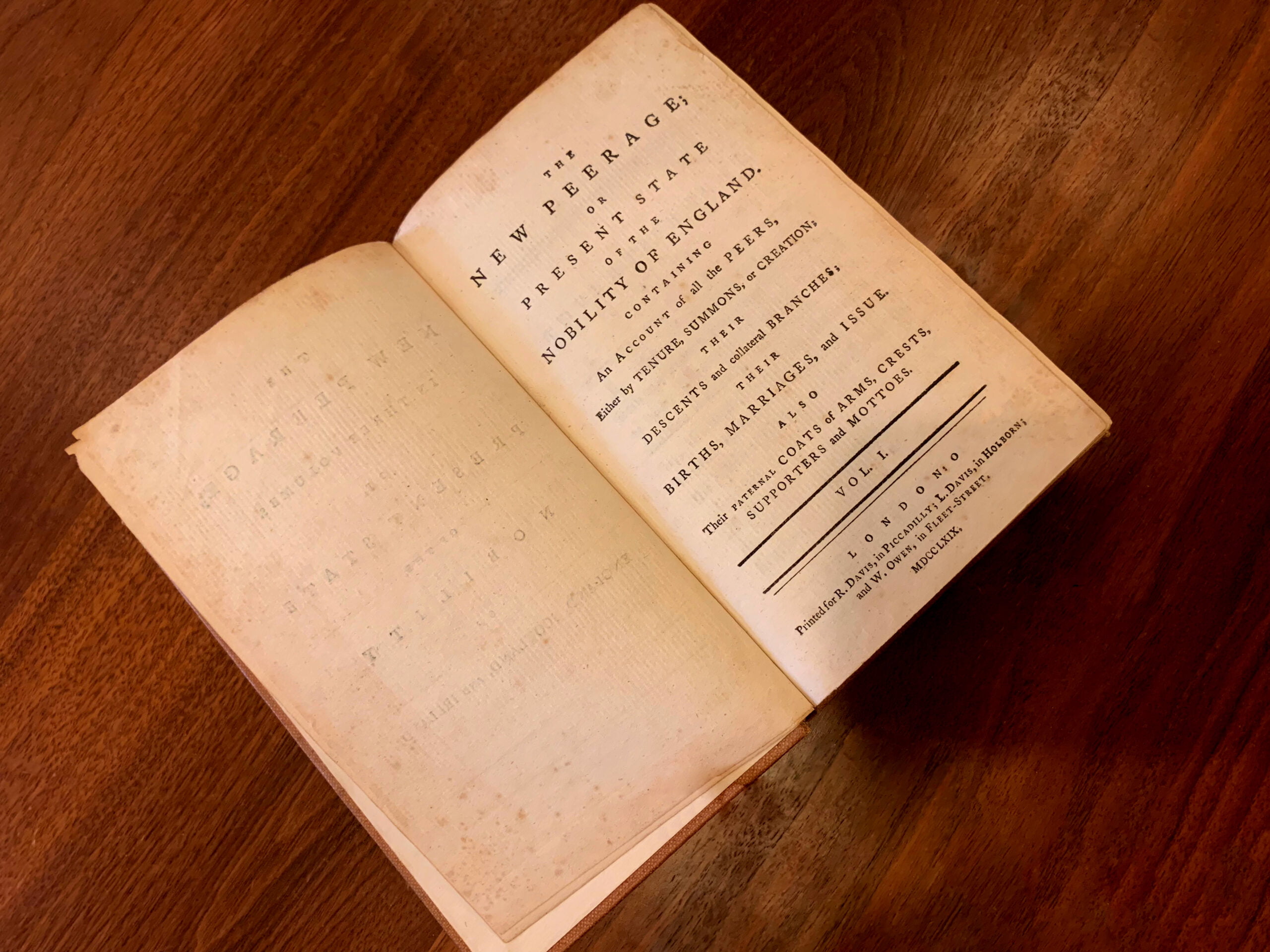 In 1675, William Dugdale, Norroy King of Arms, published a book which would be the first printed record of the Peerage and Baronetage. In the Preface, he writes:

The results of over two decades of research were eventually published in a massive book of some weight; the publishers being Abel Roper, John Martin and Henry Herringman.

Abel Roper, a bookseller of London in the mid-17th century, formed a partnership with Arthur Collins at The Black Boy in Fleet Street. Roper died in 1680, leaving his business interests to his nephew, another Abel Roper. In 1709, Collins published the first edition of his Peerage of England, which was based solely upon Dugdale’s work. Later editions included updates but Collins was not afforded the access to records that Dugdale had enjoyed, and in order to gain access to family records held by various title holders, he had adopted a tendency to flatter them and include ‘over-zealous’ accounts of their family histories. Consequently, Collins’ Peerages are not considered very accurate.

Collins died in 1760 and John Almon, bookseller and publisher of Piccadilly, who had obtained Collins’ work, set about updating and improving upon it and in 1769 published The New Peerage, a two-volume set, bound in leather and sized to fit into a gentleman’s pocket.

Almon took on one John Debrett as a clerk, and the new recruit was put to work on updating and improving the Peerage with a view to even greater accuracy. Whereas Collins had been denied access to some title holders and their records, John Almon, a well-respected and liked man, who was described by John Wilkes as ‘friend, and an honest worthy bookseller’, had no such problems and his protégé was able to take advantage of his unique connections. Debrett set about his new task with a keen eye, removing any descents left over from Collins’ work that he considered uncertain and making sure that what was left, and what was added, could be proved without question. This ethos that has been the mainstay of subsequent Debrett editors and remains our number one rule to this day.

By 1780, John Debrett was officially John Almon’s partner in the business in Piccadilly, which was then at the very height of its popularity. Their bookshop attracted the leading Whigs of the day who congregated in the shop to examine the newest pamphlets and discuss the latest news from the House.

Almon retired in 1781, leaving the business entirely in Debrett’s hands. Three years later, John Debrett published the very first edition of the Peerage which contained his name, the note at the bottom of the title page reads:

Printed for W Owen in Fleet Street; L Davis in Holborn; and J Debrett, successor to Mr Almon, opposite Burlington House in Piccadilly

Debrett’s Peerage and Baronetage can therefore trace a direct link back to that original peerage published in 1675, over 340 years ago. For 250 years, Debrett’s Peerage and Baronetage has been compiled and printed in a traditional manner. Now in 2021, it will go digital and be available online for the first time. This will allow us a luxury previous editors did not have, to keep the work up-to-date in real time.

We can be absolutely certain that John Debrett would approve.