Quick Links
Royal Ceremonies
THE EVOLUTION OF THE CORONATION
THE CORONATION CEREMONY
DRESS CODES
The coronation of the British monarch is an initiation right in which he or she is formally invested with regalia and crowned at Westminster Abbey, a ceremony that dates back to the coronation of William the Conqueror in 1066.

Coronations have remained largely unchanged for the last millennium. They comprise the following procedures: the monarch is presented to, and acclaimed by, the people; he or she swears an oath to uphold the law and the Church; the monarch is then anointed with holy oil, invested with regalia and crowned; he or she then receives the homage of his or her subjects; the service ends with a closing procession, followed by a banquet at Buckingham Palace. 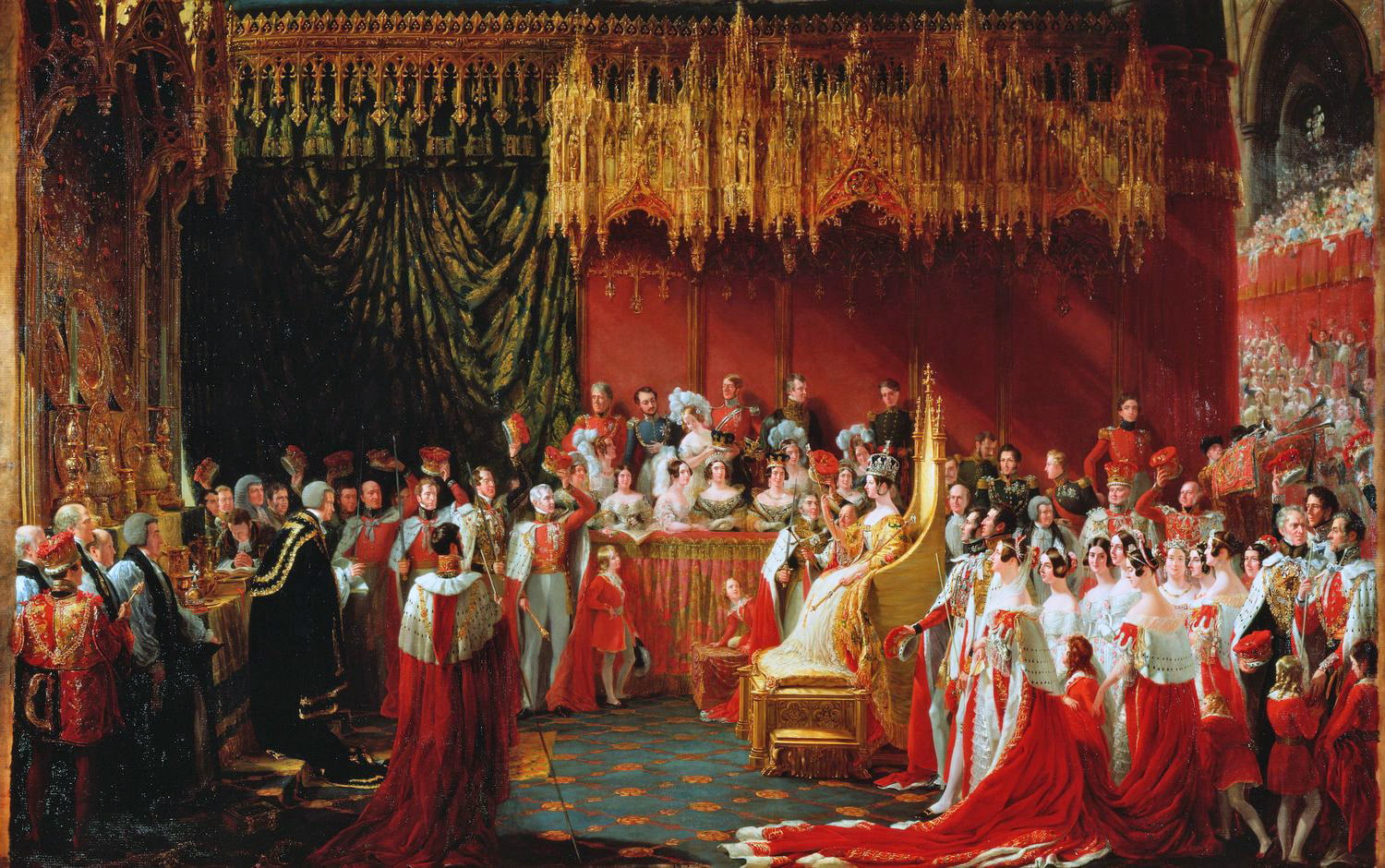 THE EVOLUTION OF THE CORONATION

The coronation of George IV in 1821 was considered scandalously costly and so from this point on proceedings were curtailed. William IV had to be persuaded to undergo a coronation in 1831 – his accession took place a time of severe economic depression. The preliminary ceremonies, which took place at Westminster Hall, followed by a grand procession on foot to Westminster Abbey, were all eliminated. The coronation ceremony itself was pared down, as was Queen Victoria’s coronation in 1838. It was also under-rehearsed and a number of mistakes and accidents marred the grandeur of the occasion.

As a result of the botched coronation of Queen Victoria, historians explored ancient liturgical tests and took rites from Medieval coronations, to create a more structured ceremony, which was used for Edward VII’s coronation on 9 August 1902. The coronation took place at the heyday of the British Empire and the post coronation route reinforced the message of imperial grandeur, including some 24,500 troops, who marched or lined the route, as well as over 2,000 bandsmen and over 4,000 horses. Amongst the troops were substantial contingents of dominion, colonial and Indian forces.

There was little change in procedure for George V’s coronation on 22 June 1911, which was taken out of the hands of the Earl Marshal’s department and managed by a Coronation Executive Committee. The ceremony involved nearly 48,000 troops.

The coronation of George VI in 1936 closely followed the structure of his father’s coronation in 1911. The event was planned as a celebration of British Empire and guests from around the world were invited to a programme of royal events that lasted nearly a month. The coronation was broadcast for the first time on radio by the BBC and parts of the ceremony were filmed and shown in cinemas.

The coronation is traditionally presided over by the Archbishop of Canterbury, although there have been occasions when other high-ranking bishops have had to preside because of the unavailability of the Archbishop.

The Great Officers of State participate in the ceremony. The Lord Great Chamberlain enrobes the sovereign with ceremonial vestments, with the aid of the Groom of the Robes and the Master or Mistress of the Robes. The Lord High Constable is a Great Officer of State who is called out of abeyance for the Coronation only.

Hereditary peers and their spouses attend the coronation, along with political figures, the prime minister, members of the cabinet, governors-general and prime ministers of Commonwealth realms, governors of Crown Colonies, and heads of state of dependent nations. Dignitaries and representatives from other nations are also invited.

The Recognition and Oath

The Sovereign enters the Abbey accompanied by the clergy and other dignitaries and takes his or her seat on a Chair of Estate, at the centre of the ‘coronation theatre’, wearing a Robe of State of crimson velvet. The Garter Principal King of Arms, Archbishop of Canterbury, Lord Chancellor, Lord Great Chamberlain, Lord High Constable and Earl Marshal move to the east, south, west and north of the coronation theatre.

The Archbishop calls for recognition of the Sovereign by the people and after their acclamation he administers the oath to the Sovereign, which ends with his/her response: “All this I promise to do. The things which I have here before promised, I will perform, and keep. So help me God.”

A service of Holy Communication follows, which is interrupted for the rituals of Anointing, Investing, Crowning and Enthronement.

As a preparation for the act of anointing, the Archbishop recites a prayer, and the choir sings Handel’s coronation anthem Zadok the Priest.

The monarch’s crimson robe is removed and replaced with the anointing gown and he/she proceeds to the Coronation chair. The chair has a cavity in the base in which the Stone of Scone is fitted – also known as the ‘stone of destiny’ this was used for Scottish coronations until it was brought to England by Edward I (from 1996 it has resided in Edinburgh Castle in Scotland, but is returned to Westminster Abbey for the coronation ritual).

Canopy-bearers, usually four Knights of the Garter, hold a canopy of golden cloth over the monarch’s head. In the most private act of the ceremony, which is not televised, the Archbishop anoints the sovereign with consecrated oil, making the form of a cross on the hands, head and heart. The monarch then stands and kneels on a footstool in front of the Coronation Chair while a prayer is recited before resuming his/her position on the Coronation Chair.

The monarch is then enrobed in Colubium Sindonus, a simple sleeveless white shift symbolising humility, which is then covered by the Supertunica, a full-length belted coat, made of gold and embroidered.

The Dean of Westminster and other officiating bishops pick up the St Edward’s Crown from the High Altar and proceed with it to the Coronation Chair where it is handed back to the Archbishop.

When he has placed the crown on the monarch’s head, the guests in the abbey cry out three times in unison “God save the King/Queen”. Peers of the realm, princes and princesses of the royal blood and officers of arms put on their own coronets. The trumpeters sound a fanfare and church bells are rung across the kingdom.

The Archbishop enunciates the crowning formula:

“God crown you with a crown of glory and righteousness, that having a right faith and manifold fruit of good works, you may obtain the crown of an everlasting kingdom by the gift of him whose kingdom endureth forever.”

The monarch now rises from the Coronation Chair and is seated on the throne. At this point the Archbishop and bishops swear their fealty, followed by the peers’ act of homage, and then the clergy and individual members of the royal family. (“I, xxxxxxx, do become your liege man of life and limb, and of earthly worship; and faith and truth will I bear unto you, to live and die, against all manner of folks. So help me God.”)

At this point, if there is a queen consort, she is anointed, invested, crowned and enthroned in a simpler service.

The Communion service, interrupted earlier, is now resumed and concluded.

The monarch now proceeds to St Edward’s Chapel, where the crown and all the other regalia are laid on the high altar. The Robe Royal and Stole Royal are removed and the monarch is enrobed in the Imperial Robe of purple velvet. Wearing the Imperial State Crown, he or she carries the Sceptre with Cross and the Orb and leaves the chapel, while the congregation sing the national anthem. 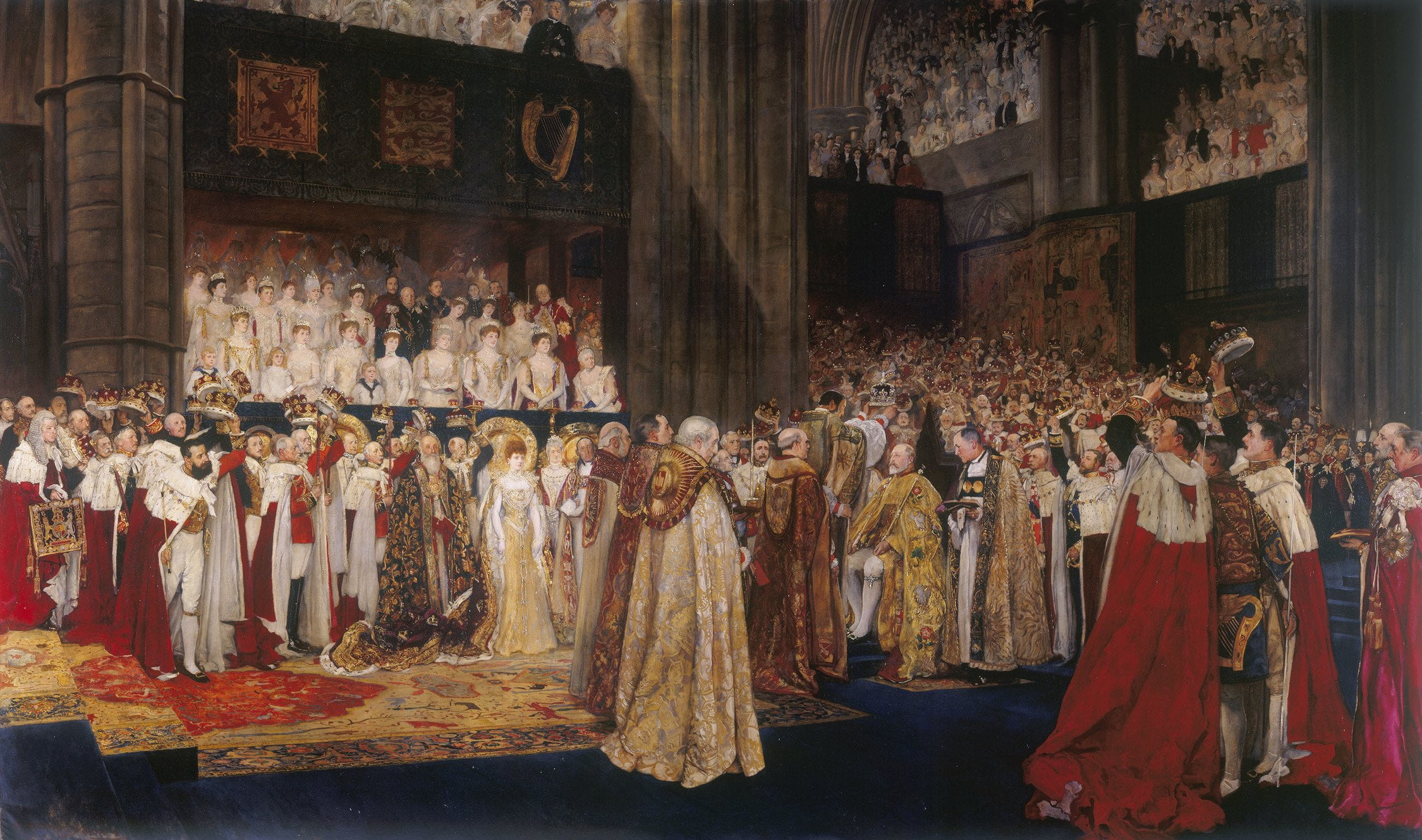 Princesses of the United Kingdom wear purple velvet mantles edged with ermine over their court dress. Princes and Princesses are provided with distinctive coronets, which they wear throughout the ceremony. Royal princes wear distinctive form of peers’ robes, which have six rows of ermine.

Peers and peeresses (including wives of peers) wear full Robes of State. Peers’ robes are full-length garments of crimson velvet, edged with miniver pure (white fur from the winter coat of the Northern red squirrel), with a full cape of miniver pure attached. Rows of ermine tails indicate the peers’ rank. These are worn over full-dress uniform, Court Dress, evening dress or a black suit with a bow tie.

A peeress’s coronation robe is a long trained crimson velvet mantle, edged with miniver pure, with a miniver pure cape. The length of the train varies with the rank of the wearer.

The coronets that peers wear during the ceremony are differentiated according to rank.

Female participants wear evening dresses or ‘afternoon dresses’, with a light veil covering the back of the head. Coats and hats are not permitted but tiaras can be worn.