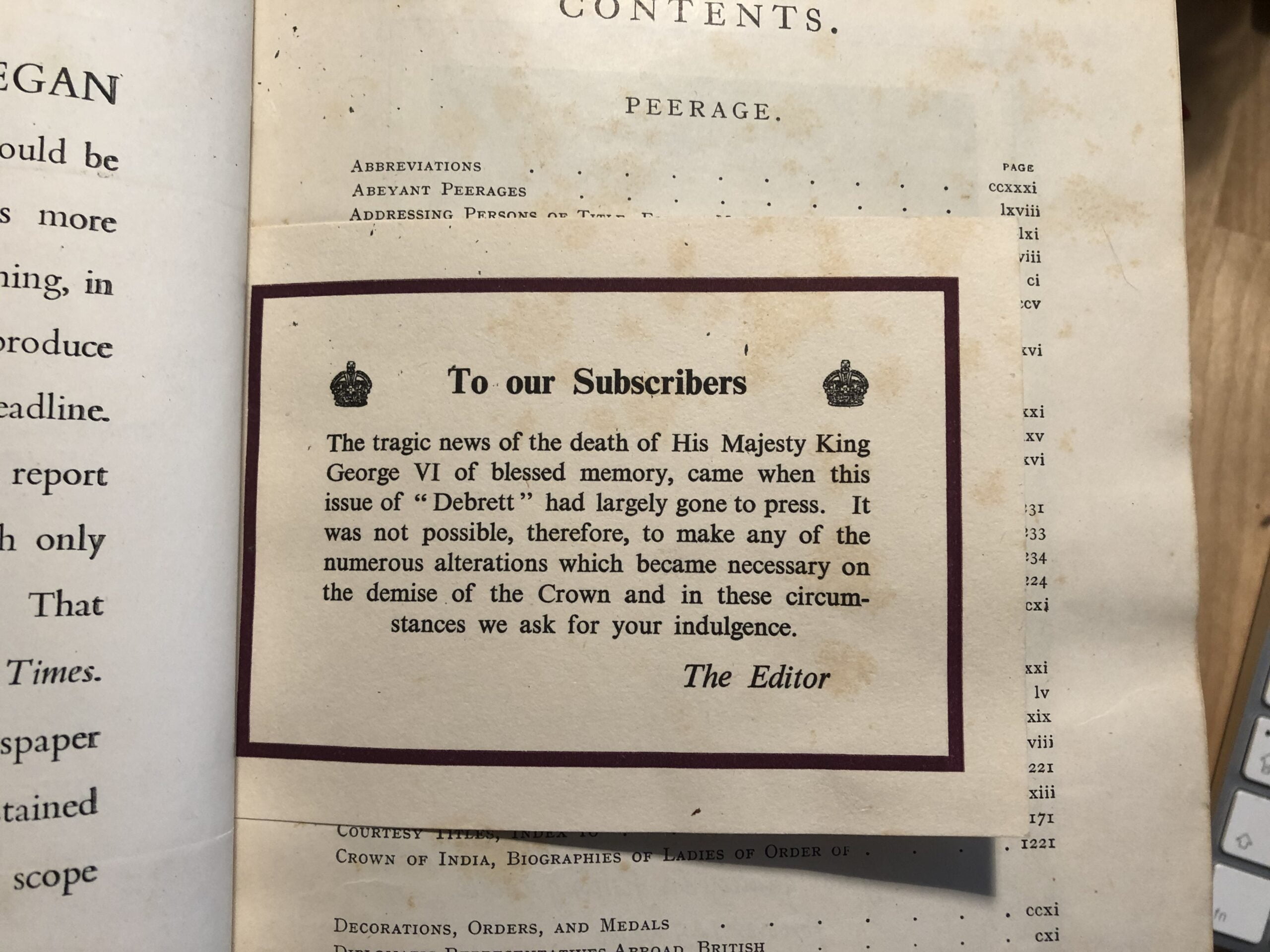 The death of George VI came too late for the 1952 edition and so Hankinson added in a respectful addendum, suitably bordered in black. That same year, the offices were based in Covent Garden, specifically at number 96 Long Acre (long since demolished). We moved along this road to 128 Long Acre finally relocating to 65a Long Acre, where we remained based until 1962.

In 1953, to celebrate the bi-centenary of John Debrett’s birth, a lunch was held at the House of Lords and attended by many ‘members of the nobility’ and one Col E M Debrett, RA, a great-great-grandson of John Debrett. The Daily Express reported ‘everyone who mattered was there’.

Between 1962 and 1980, Montague-Smith took over as editor and remained a consultant editor until his death in 1986. He was one of the most gifted genealogists of his day, and it was his inspired idea to research and write Debrett’s Correct Form, first published in 1971, now renamed Debrett’s Handbook.

It was during the Queen’s Silver Jubilee year that Debrett’s created a department whose specific purpose was to trace the ancestry of those not included in the Peerage and Baronetage, this move was prompted by the general public’s growing interest in family history. This department became a separate company in the mid-1980s: Debrett Ancestry Research Ltd.

From 1983, the Book acquired two new editors, Charles Kidd and David Williamson. Both men were experts in their field, and were joint editors of Debrett’s Peerage and Baronetage (the first edition bearing their names appeared in 1985) until Williamson’s death in 2013.

Williamson had begun his working career with the Geoffrey Bles Ltd (the first publisher of C S Lewis’ Narnia series). Before joining Debrett he was an antiques dealer, editorial assistant and held a series of other ‘odd-jobs’, but his happiest, longest and most prolific work was with Debrett. During his time as co-editor of the Book, he was also the editor of Debrett’s Distinguished People of Today series, which later became People of Today, as well as several books on royalty and European peerage. Williamson was also a broadcaster and was always in high demand. He had an innate willingness to help with his expertise. He even made a cameo appearance in the film Johnny English, as the Dean of Westminster, a role he was given as a thank you from the producers for his assistance.

Charles Kidd continued on a sole editor, with the aid of several assistants, until his retirement in 2018. He acted as consulting editor on the 2019 edition, the 150th and final edition, published in our 250th year, which was completed with the help of three guest editors from Debrett Ancestry Research Ltd.

The decision has now been made for Debrett’s Peerage and Baronetage to ‘go digital’, with the launch of this new website, which is dedicated to providing accurate, detailed data and etiquette advice all based on excellence and 250 years of experience.

‘The POCKET PEERAGE of ENGLAND, SCOTLAND and IRELAND; containing the Defcent and Prefent State of every Noble Family; with the Extinct, Forfeited, and Dormant Titles of the three Kingdoms. Alfo, General and Particular INDEXES, with the Arms emblazoned and the Mottoes tranflated. In 2 vols, price 9s, in boards.’

Nine shillings, for two volumes, which in today’s money translates to 45p. The last 2019 edition of Debrett’s was also two volumes but its retail price was £450. The move to digital, which was the logical next step for the company, has coincided with another first for Debrett’s, the appointment of the first female editor in its 250-year history: Wendy Bosberry-Scott.