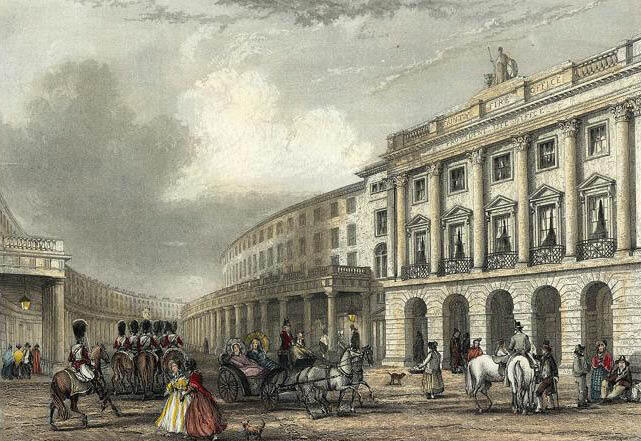 During the early part of the nineteenth century, John Debrett had help in editing the book that now bore his name; Francis Townsend edited the 1818 edition and continued in this role until his death in 1833.

Townsend was born in the College of Arms in 1786, where his father, another Francis, held the post of Windsor Herald. Townsend followed in his father’s footsteps and became Rouge Dragon in 1820 and he continued his connection to the College throughout his life. In these early years of Debrett’s history, the editors would remain closely connected to the College, with several heralds taking up the mantle of editor and assistant editor.

In 1822, John Debrett was found dead at his lodgings in Upper Gloucester Street, Regent’s Park. For the last few years of his life, he had run his business with the help of his wife, Sophia, who was regarded within the family as the one with the business mind and a far sounder grasp of matters financial. She sold the business to a company named Rivington, whose offices in St Paul’s Church Yard were close by the College of Arms.

Townsend’s clerk, William Courthope, became the next editor of Debrett’s in 1833, a post he held for the next three years. Courthope was a lawyer, admitted to the Inner Temple in 1851, but he never practised law, instead he pursued a career with the College, rising to Somerset Herald in 1854 and eventually becoming the Registrar. He was known for his accuracy in his work and as well as editing Debrett’s and his College duties, he was a regular contributor to the Gentleman’s Magazine and other works of genealogical record.

In 1840 a new editor took over from Courthope. This was George William Collen, the son of Thomas Collen, a gentleman of Westminster. Collen was editor of the 1840 and 1841 editions and was assisted on the 1844-49 editions by his brother Henry. By 1851, Collen had also joined the College and was Portcullis Pursuivant, a post he held for the rest of his life.

In 1849, Debrett’s was bought by William Pickering, an antiquarian bookseller of 180 Piccadilly; thus the book had returned to its roots, and John Debrett’s old shop. Pickering was well known in the publishing world. He was the publisher of Samuel Taylor Coleridge, shareholder of the Gentleman’s Magazine, and was instrumental in starting the ‘New Series’ of this important and widely read work. The 1851 census shows Pickering as a bookseller and publisher, employing several apprentices and a printer in premises at 177 Piccadilly. Pickering edited the 1849 edition, which was the last to be published for fifteen years as Pickering had fallen foul of new copyright legislation; following his death in 1854  the effect on his business was enough to leave his family destitute. After Pickering’s death his son carried on his business until 1878 when it was sold to a Mr Chatto, one of the founding fathers of Chatto and Windus.

Dean & Co acquired the copyright and the Peerage and Baronetage in 1864, and it continued as an annual publication until 1973. A knightage section was added in 1865 and remained part of the volume until 1973.

The first editor under the ‘Dean Regime’, according to Hankinson (a later editor who chronicled some of the history of the company in his memoir) was a ‘Mr Gilbert’. This was probably William Gilbert, clerk of St Paul’s, Covent Garden, who in the 1881 census stated he was working for a ‘commercial publisher’. Gilbert was likely editor of Debrett’s between 1864 and 1877.

The remaining years of the nineteenth century saw two more changes of editor. Robert L Mair, LLD, was editor between 1878 and 1887. Census records tell us that he worked from home as the address given for Debrett in the 1887 edition was 6 Batoum Gardens (Hammersmith), which also housed Robert and his wife Mary. Mair oversaw the 1887 edition (published in Queen Victoria’s Golden Jubilee year) before handing over the reins to Arthur George Maynard Hesilrige. Mair’s last editorial noted:

‘As an historical fact it may be interesting to notice that Debrett is the oldest serial extant; and, having been well established before George III was King, it is the only publication which has existed throughout the whole Jubilee periods of two English Monarchs.’