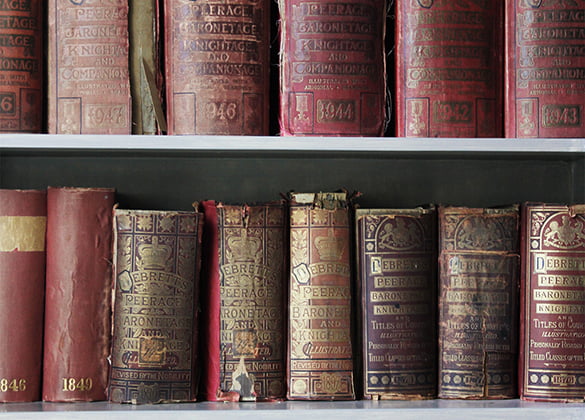 Abeyance The technical term given to a title (usually an English barony created by writ) which is in a state of suspension between co-heirs.

Attainder A peerage may be forfeited through an act of attainder, most commonly in cases of high treason. For example, in 1554 the Duke of Suffolk's peerage was attainted (and he was beheaded) by Queen Mary Tudor. This followed his failure to have his daughter, Lady Jane Grey, accepted as Queen.

Baron The lowest rank of the peerage, standing beneath duke, marquess, earl and viscount.

Collateral Branches This is the term used to denote relations of the peer or baronet more remote than brothers or uncles (in other words from first cousins to the most remote kinsmen).

Courtesy Title A style and form of address in systems of nobility used by the children and other close relatives of a peer. These styles are used 'by courtesy' in the sense that the users do not themselves hold their own titles.

Dormant If a peer dies and heirs to the title - although they are believed to exist - cannot be traced, the peerage falls dormant. This may also happen if an heir has insufficient evidence to prove his legitimate claim to the title.

Duke The highest rank of the peerage, standing above marquess, earl, viscount and baron.

Earl The third highest rank of the peerage, standing below duke and marquess and above viscount and baron.

Extinct A peerage may become extinct when the current title-holder dies, and no heir with a direct descent from the first peer is eligible to inherit according to the terms of the original creation of the peerage. The title reverts to The Crown. The Crown can bestow the title on a member of a different family, but this would be the creation of a new peerage, requiring new letters patent.

Garter King of Arms The chief herald at the College of Arms; all new peers have to have their titles and territorial designations approved by him.

Heir General If an 'heir male' is not specified, a female heir ('heir general') may inherit a title.

Letters Patent An open letter issued by the Sovereign, by which peerage titles are granted.

Limitation A specification that describes how a title is to be inherited, either to male heirs 'of the body' or other members of the family (e.g. daughters, brother, sisters, or their children).

Lord Lyon King of Arms The equivalent of the Garter King of Arms in Scotland. All new peerages have to be approved by him.

Marquess The second highest rank of the peerage, standing below duke, and above earl, viscount and baron.

Official Roll of the Baronetage The formal list where all baronetcy creations and successions are recorded, as evidence of their rank and status.

Remainder This is a description, contained within the letters patent that confer a peerage, which specifies how the title may descend after the death of the person who has been ennobled. A 'limitation' to the remainder usually specifies that the title may only descend to male heirs 'of the body', but there are other titles with special remainders, widening the limitation to include female heirs.

Viscount The fourth highest rank of the peerage, standing above baron, and below duke, marquess and earl.

Writ of Summons The official command from the Sovereign to a peer (hereditary or life) to attend Parliament.