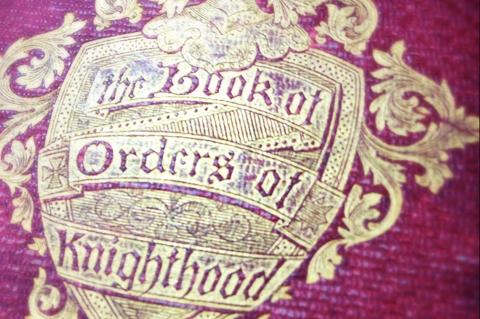 The Knightage is the collective term for Knights Bachelor, and Knights and Dames of the Orders of Chivalry.

Records of these honours are held at the Central Chancery of the Orders of Knighthood, St James's Palace, London SW1A 1BH.

All knights and dames were recorded in Debrett's Peerage and Baronetage up to and including the 1973-74 edition, but by this date the numbers of honours being created made their continued inclusion unfeasible.

Today there are in the region of 3,000 living knights and dames.

The Queen normally holds 14 investitures every year: six during February to March, two in July and six between October and December. If The Queen is abroad, another senior member of the royal family will deputise.

The organisation of an investiture lies with the Lord Chamberlain's Office. The ceremony takes place in the ballroom of Buckingham Palace. At each investiture approximately 135 people receive their Orders, a small number of which will be knighthoods and damehoods.

An honour may be used from the moment it has been announced in the Press. There is no need to wait until the recipient has received the accolade or been invested.

At an investiture the person receiving the honour is announced by the Lord Chamberlain, standing on the Sovereign's right. The Lord Chamberlain reads out the name of the recipient and the reason for the award. If the honour to be conferred is a knighthood, the recipient kneels with his right knee upon the investiture stool, and The Queen 'dubs' him with the investiture sword (but does not say 'Rise Sir John'). He then stands to the left of the stool and is invested with the insignia of the appropriate Order of Knighthood. A Knight of an Order of Chivalry receives a star pinned on the left side of the coat and a badge, worn on a riband or at the neck. A Knight Bachelor receives only a badge.

Dames do not receive the accolade (i.e. they are not ceremonially 'dubbed'). The Secretary of the Central Chancery of the Orders of Knighthood is responsible for placing the correct decoration on a cushion, held by a senior member of the Household, for The Queen to present to the lady in question.

Foreign citizens who are accorded honorary knighthoods do not receive the accolade, nor is the prefix 'Sir' borne by honorary knights. This also applies to clerics of the Church of England (whose wives do not use the style of 'Lady', but are entitled to the precedence usually accorded to the wives of knights.)