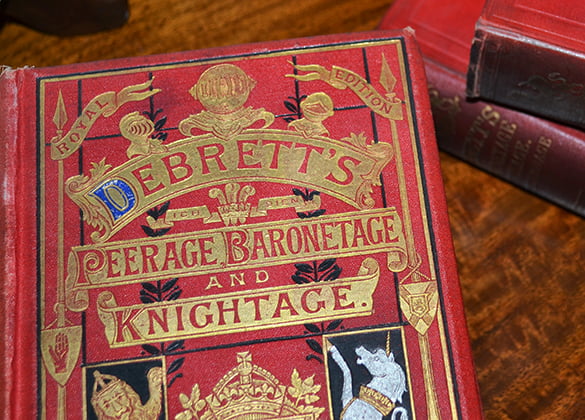 Baronets constitute an entirely separate dignity of their own, the Baronetage. As distinct from barons, baronets are neither members of the peerage nor of the knightage (these titles are conferred by The Crown for life only).

As holders of a hereditary dignity, their place in the table of general precedence is below the sons of Lords of Appeal in Ordinary (judges who are always barons) and above Knights of the Garter.

In the past 'Bart' was the favoured abbreviation to follow the name of a baronet on an envelope, or on a list of names, and this may still be used if desired. However, 'Bt' is now more commonly used.

The hereditary order of baronets in England was instituted by letters patent by King James I on 22 May 1611, for the settlement of Ireland. He offered the dignity to 200 gentlemen of good birth, with a clear estate of £1,000 a year, on condition that each should pay into the king's exchequer in three equal instalments a sum equivalent to three years' pay to thirty soldiers at 8d per day per man.

The creation of baronetcies lapsed in 1964; in 1990 the Conservative Government announced that this honour would be given to Denis Thatcher, but there have been no further creations.

The Official Roll of the Baronetage is the formal list where all baronetcy creations and successions are recorded, as evidence of their rank and status. It was instituted by Royal Warrant of King Edward VII dated 8 February 1910. Under the terms of a further royal warrant dated 10 March 1922, anyone claiming a baronetcy may apply to be entered on the Roll.

The vast majority of baronetcies may descend in the male line only, but there are a few (all Scottish) that may descend to heirs-general.