Ranks and Privileges of The Peerage

Ranks and Privileges of The Peerage 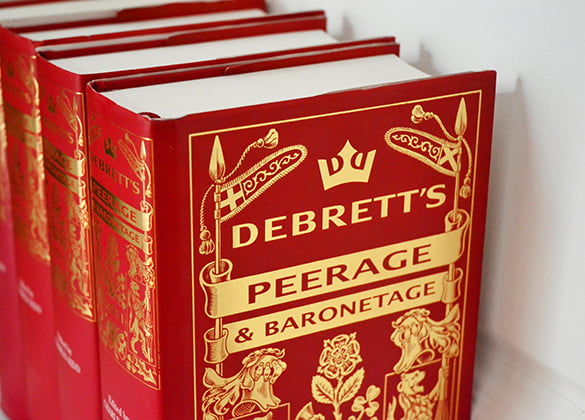 The five titles of the peerage, in descending order of precedence, or rank, are: duke, marquess, earl, viscount, baron. The highest rank of the peerage, duke, is the most exclusive.

This hierarchy of titles becomes further complicated by the fact that an individual peer can hold several peerages of different rank, created and conferred, or inherited, at different times over the centuries.

The precedence that any one peer has among those of his own degree (rank) is dependent upon the antiquity of the peerage in question. That is to say, the older the title, the more senior the title-bearer.

The Life Peerage Act of 1958 allowed the government to create life peerages (all baronies). Normally the Prime Minister chooses only peers for his own party, but he also permits the leaders of opposition parties to recommend peers from their own parties. Life peers, sometimes referred to as 'working peers', represent the various political parties and are expected to regularly attend the House of Lords. 'People's peers' are non-political appointments and recommended by the non-statutory House of Lords Appointments Commission set up in 2000. 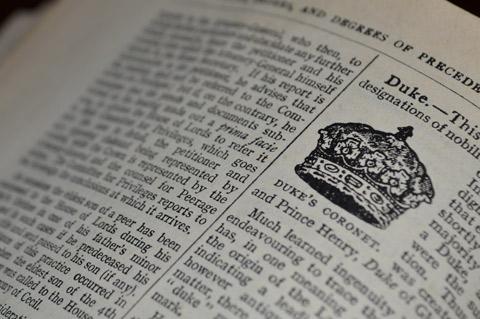 Duke is the highest of the five ranks of the peerage, standing above the ranks of marquess, earl, viscount and baron.

The title duke is derived from the Latin dux, a leader. The title originally signified Sovereign status, for example William the Conqueror was Duke of Normandy, and it was not adopted as a peerage title until 1337, when King Edward III conferred the Dukedom of Cornwall upon his eldest son, the Black Prince.

Dukedoms were created in Parliament by the fastening of a ceremonial sword to a belt or girdle (cincture). This ceremony was traditionally used until 1615, when it was replaced by the conferring of letters patent under the Great Seal (peerage patents are always created by letters patent under the Great Seal, which represents the Sovereign’s authority).

The first subject to receive a dukedom who was not a member of the royal family, nor one nearly related, was Sir William de la Pole, Marquess of Suffolk, who was created Duke of Suffolk in 1448.

The Queen’s youngest son, Prince Edward, broke with royal tradition when he chose the title of Earl of Wessex upon his marriage in 1999. Buckingham Palace announced that the Earl of Wessex will be granted the dukedom of Edinburgh when the title reverts to The Crown (the title will only revert to The Crown on both the death of the current Duke of Edinburgh, and the succession of the Prince of Wales to the throne).

The other royal dukes are The Queen’s first cousins, the Duke of Gloucester and the Duke of Kent (both grandsons of King George V).

Since 1989 only one dukedom has become extinct, Portland (in 1990), but the Earldom of Portland continues and is currently held by Timothy Bentinck, who plays David Archer in BBC Radio 4’s drama series ‘The Archers’.

The second most senior rank in the peerage, beneath duke, is marquess. The marquess stands above the ranks of earl, viscount and baron. The dignity of a marquess is referred to as a marquessate.

Marchio was a Norman term of reference to earls or barons guarding the Welsh and Scottish Marches, or border territories. Similarly in Germany the Count (or Graf) became known as Markgraf, anglicised to Margrave.

The title was introduced to England by King Richard II, brother-in-law of the Margrave of Brandenburg, the honour being conferred upon Robert de Vere, Earl of Oxford, who became Marquess of Dublin in 1385. The title was conferred by letters patent under the Great Seal, which represents the Sovereign’s authority.

The fact that the new title of marquess was given precedence over earls caused great offence to the latter, and de Vere’s patent was revoked in 1386.

The title of marquess remained unpopular in England. John Beaufort was the eldest of the legitimated sons of John of Gaunt. When his title, Marquess of Dorset, was attainted (forfeited) and the House of Commons appealed to King Henry IV for its restoration in 1402, Beaufort begged the king not to restore this particular title ‘as the name of marquess is a strange name in this realm’. 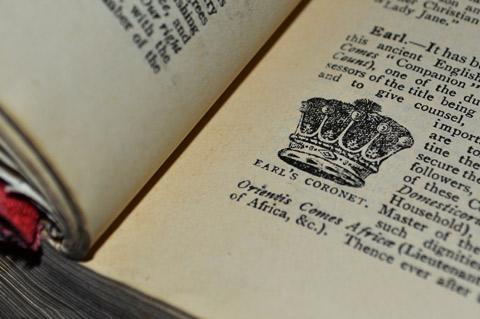 Earl is the third rank of the Peerage, standing above the ranks of viscount and baron, but below duke and marquess.

Before King Canute (c. 994-1035) an ‘ealdorman’ administered a shire or province for the king. Under Canute the Danish equivalent of earl was introduced, and under the Norman kings the title became hereditary, although the earls eventually lost some of their responsibilities as the king’s representatives in the county to the sheriff.

As with dukes, the dignity of earl was conferred by the fastening of a ceremonial sword to a belt or girdle (cincture). In time, a ceremonial cape and golden circlet (placed on the head) were added to the ceremony. In 1615, under King James I, these rites ceased. All earldoms were conferred by letters patent under the Great Seal, which represents the Sovereign’s authority.

From the reign of King Richard II (1377-99) earldoms were either life creations or hereditary with ‘remainder to heirs male’ (the inheritance of the title was restricted to direct male heirs of the original title-holder). Some Scottish earldoms may be inherited by a woman or pass through the female line.

The most recent earldom to be created is Stockton, created in 1984. Since 1989 four earldoms have become extinct, Amherst, Monsell, Sondes and Munster, and Breadalbane is dormant. A title generally falls dormant in circumstances when a peer dies and, although it is believed that there may be heirs to the title in existence, (a) their whereabouts may not be known, or (b) there is insufficient documentary evidence for an heir to prove that he is in fact the next heir of line to the late peer. 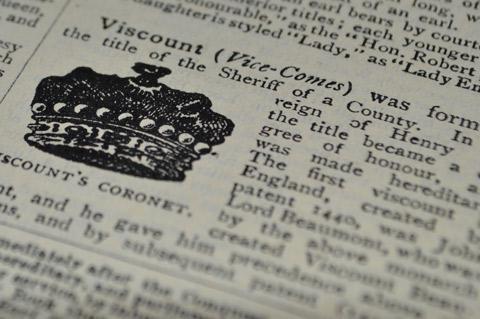 The fourth rank in the peerage, the viscount is ranked below duke, marquess and earl, but above baron.

This title had its origin in the office of the deputy or the lieutenant (vice-comes) of a count, a rank that had become hereditary in the Holy Roman Empire by the beginning of the 10th century. It was also used for the sheriff of a county.

This new peerage title received precedence above all barons, but it did not become popular until the 17th century. Viscounts were always created by letters patent under the Great Seal, which represents the Sovereign’s authority. 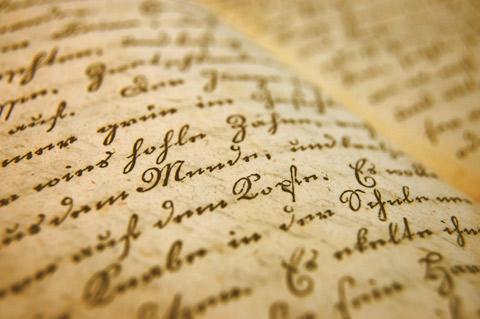 The fifth and last rank of the peerage is that of baron, which is ranked beneath duke, marquess, earl and viscount in precedence.

Baron literally meant ‘man’, being the king’s tenant in chief (i.e. a land-holding nobleman). In the 13th century the barons were summoned by the monarch, by means of a Royal writ, to attend the Counsel or Parliament. Initially the conferral of this privilege did not imply that their successors would necessarily also be summoned to subsequent Parliaments. But by the reign of King Edward III (1327-77) it had become usual for successors of the more important barons to receive writs as a matter of course, in practice creating an hereditary dignity.

The first baron to be formally created by letters patent under the Great Seal, which represents the Sovereign’s authority, was John Beauchamp de Holt, created Baron Kidderminster, by King Richard II in 1387. After about 1440 this became the normal method of creation of baronies. 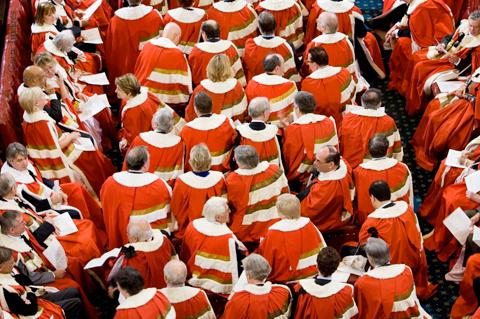 A life peerage is an honour bestowed on an individual, which cannot be passed on to the recipient’s children, although they are allowed to use courtesy titles throughout their own lifetime.

The Main Honours Committee at 10 Downing Street reviews the research of eight specialist sub-committees, covering the fields of Arts and Media, Sport, Health, Education, Science and Technology, The Economy, Community (Voluntary and Local Services), and State.