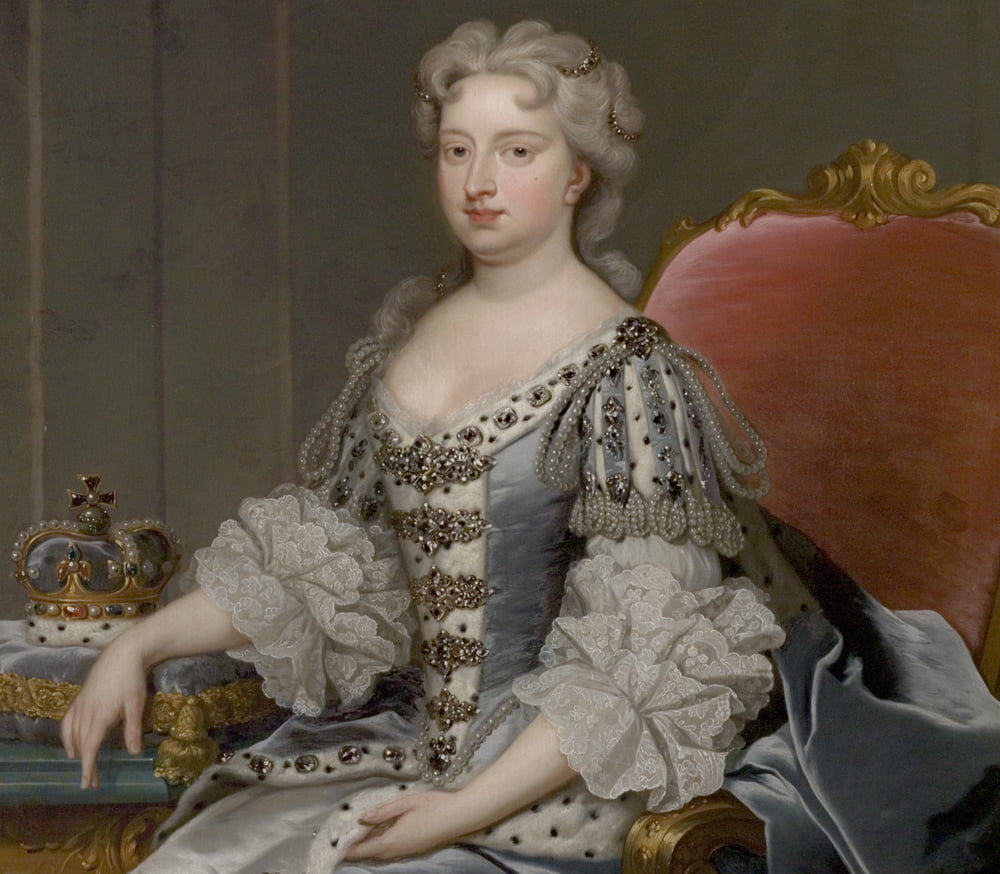 Credited with bringing the Enlightenment to England, Caroline of Ansbach was the sophisticated, beautiful and very intelligent wife of George II.

A descendant of the House of Hohenzollern, she lost her parents young and grew up under the guardianship of King Frederick I and Queen Sophia Charlotte of Prussia. She received a liberal education at the Prussian court and, with her looks and brains, was regarded as one of the most eligible German princesses.

In 1705, she married George Augustus, heir to the Elector of Hanover. Serially promiscuous and unfaithful, George was nevertheless in love with her. He was also consistently outsmarted by his wife, and his English subjects enjoyed the following couplet:

“You may strut, dapper George, but ‘twill be in vain,
We know ‘tis Queen Caroline, not you, that reign.”

One of the main problems Caroline had to deal with, when she moved to the English court, was the obsessive dislike her father-in-law, King George I, had for his son. George senior did not have a consort, so naturally court life centred on the household of his son and Caroline. Initially the King was quite happy with this arrangement, which allowed him to spend more times on the affairs of Hanover, but he soon became jealous of their rising popularity.

Caroline, who had produced a family of three boys and five girls, was not willing to put up with his behaviour. She turned her household into a centre of opposition to George I and befriended the politician, Sir Robert Walpole. In 1720 Walpole became prime minister, and brought about a reconciliation between father and son. Caroline rejected the Georgian obsession with Hanover, instead siding with Walpole, who had great ambitions for England as a commercial and imperial power. When George I died, Caroline maintained her relationship with the prime minister, meeting and agreeing on important matters. She then used all her wiles to persuade the king of their point of view, flattering him and allowing him to believe that he was the source of any valuable or innovative idea.

Caroline managed George’s infidelities by encouraging non-threatening candidates and befriending them. The only hitch in this procedure was when George went to Hanover and fell in love with Amelie von Wallmoden. Realising that he was staying in Hanover to be with his new mistress, Caroline reluctantly consented to him bringing her to England – an offer he eventually declined, realising his wife was more important to him than his mistress.

Passionate about the arts, Caroline championed salons discussing literature, philosophy and science. She was an early adopter of the smallpox vaccine, deciding to immunise her own children, which reinforced public confidence in the new-fangled invention. She was devoted to the wellbeing of her daughters, but seemed much more ambivalent about her sons. She openly detested her eldest son and heir, Frederick, who took after his grandfather.

By 1737, when she was in 54, she became mortally ill – it is unclear whether it was cancer or a degenerative heart condition. Bedridden, and watched over by her doting husband and two unmarried daughters, she died in November 1737. Her hated son, Frederick, never came to the throne, dying before his father. Frederick’s son became George III. 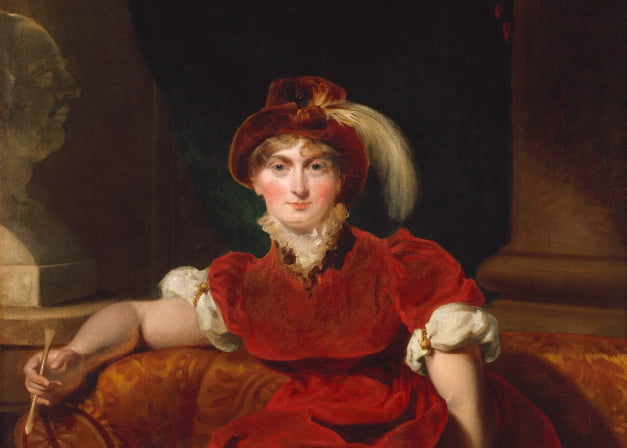 Portrait of Caroline of Brunswick by Thomas Lawrence, 1804

King George III had seven sons who, despite an austere and puritanical upbringing, grew up to be pleasure-loving and profligate. They all had mistresses and a retinue of illegitimate children. In a desperate attempt to control the situation, George III enacted the Royal Marriage Act of 1772, which proclaimed that any marriage made by a member of the royal family required the permission of the King to legitimate it.

His eldest son George had fallen in love with Maria Fitzherbert, who was a twice-widowed commoner and a Catholic. A respectable woman, who lived a quiet life in the seaside village of Brighthelmstone (later Brighton), she resisted George’s amorous advances, and persuaded him that the only way he could ever have her was to marry her. He complied with her wishes, secretly married her, and they proceeded to live together as man and wife for the next ten years; although it was widely believed that she was simply George’s mistress. George was compulsively unfaithful, and they finally separated when Maria could not tolerate his passionate affair with Frances Villiers, Countess of Jersey.

At this point, despite his secret marriage, he began to assess the array of approved Protestant princesses, who would be acceptable under the terms of the Royal Marriage Act. Caroline of Brunswick, the daughter of George III’s youngest sister, was aged 28 and unmarried. It was well known amongst her family that she was slovenly, unhygienic, slipshod and lacking common sense, but nobody shared this information with George. Nor did they explain that she was prone to telling tall tales and making outrageous statements, which would eventually lead to scandal.

Caroline was duly despatched to England, where George met her for the first time. He was horrified by her disappointing appearance and foolish demeanour, but it was too late to call off the marriage, which took place on 8 April 1795. George got blind drunk at the wedding feast, while Caroline suffered from an upset stomach – according to Caroline’s later account, her wedding night was the only occasion on which they had connubial relations and their daughter, Princess Charlotte was born exactly nine months later.

Caroline, abandoned and unloved, began a campaign to oust the Countess of Jersey from her husband’s affections. She even complained to George’s father, the king, who pressurised his son to eject Frances from his household.

George could not stand physical proximity to his wife and in August 1797 a formal separation was agreed – Caroline moved her household to a rented mansion in Blackheath. Once installed in her new home, Caroline’s life descended into an extravagant round of parties, and ‘flirtations’ with local gentlemen. She saw very little of her daughter, and was seen as a thoroughly bad influence. In 1802 she adopted a three-month-old boy, William Austin. A near neighbour, Lady Charlotte Douglas, who had once been friendly with Caroline, before they had a falling out, claimed that the baby William was Caroline’s illegitimate son.

This scandalous accusation provoked the so-called “Delicate Investigation”, when four eminent men investigated, and ultimately refuted, Lady Douglas’s claims. But the investigation examined her ‘improper’ relations with other gentlemen, and was the subject of much gossip. Caroline had gone too far, and was now forced to try and build bridges with her uncle, George III.

Meanwhile George III had been sinking into madness and his eldest son was appointed his father’s regent in 1811. At this point he banished Caroline from the court and, intent on divorce, reopened the investigation. To his surprise, Parliament rose to the defence of Caroline, and she was exonerated.

In 1814, Caroline embarked on travels on the continent. She sacked her English ladies-in-waiting and embarked on a series of amorous adventures. She did not even return to England when her daughter Charlotte died in childbirth. In 1820 George III finally died, and Caroline decided to return and take up her role as Queen of England. George, now George IV, was convinced that he had reason to divorce her on the grounds of adultery. The bill was introduced to Parliament and the hearing lasted for three months. George’s second-hand evidence of her misdemeanours was ruled inadmissible.

George, despite his loss, was never going to see her crowned Queen of England. On 19 July 1819 she turned up at Westminster Abbey for the coronation, but was thrown out. Upset and traumatised, she became ill, dying just 19 days later. George outlived her by nine years, but never remarried – it fell to his elderly brothers to marry and legally beget heirs.