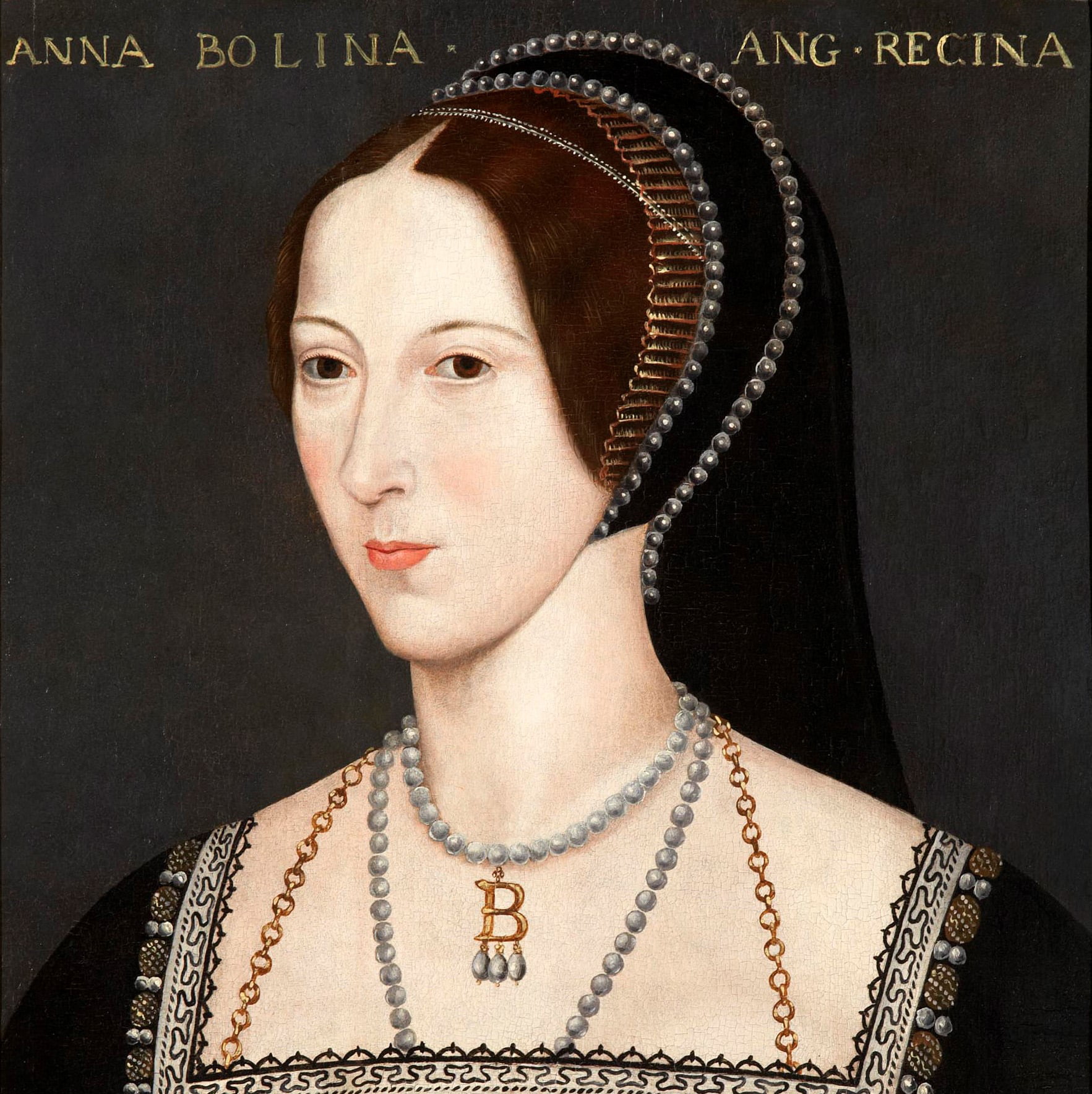 Near contemporary painting of Anne Boleyn at Hever Castle, c. 1550

A captivating sensation at court, Anne turned Henry VIII’s head. His divorce from his first wife to allow his marriage with Anne led to a permanent rupture with the Roman Church and the beginning of the English Reformation. Unable to provide a son and caught up in the power politics of the Tudor court, Anne fell foul of her doting husband, was tried for treason, and beheaded at the age of 29.

Anne was the daughter of Sir Thomas Boleyn, a wealthy and ambitious merchant who had married into the influential Howard family – his wife was the Duke of Norfolk’s sister.

Anne grew up in Norfolk and was sent to the court of Louis XII in France, when she was just twelve years old, as a kind of finishing school. She spent two years there acquiring a range of courtly graces, and Henry VIII set eyes on her shortly after her return to England, aged 14. She soon joined the Queen’s household and was considered a great success at court. Although she was not conventionally beautiful, she was known for her sparkling dark eyes, her vivacity, wit and intelligence, and was soon being pursued by a number of smitten courtiers.

By 1525, Henry was already infatuated with Anne, and intervened to quash her two putative affairs with Henry Percy, heir to the earldom of Northumberland and Sir Thomas Wyatt. Henry implored Anne to become his mistress, but she resisted his advances, even though the prospects of marriage must have seemed remote.

Henry, desperate for an heir and obsessed with Anne, realised she meant what she said. He began to set in motion the processes that would dissolve his marriage to Catherine of Aragon, and clear the way for a union with Anne. She managed to keep the king at arm’s length until the point where it seemed inevitable that the king was ready to break with the Roman pope and divorce Catherine. She finally yielded to the king’s advances and almost immediately became pregnant.

On 25 January 1533 they were secretly married, securing the legitimacy of the child she was carrying, and a magnificent coronation followed on 1 June. The king and Anne were happy, the focus of a young, lively and pleasure-loving court. On 10 September 1533 the child was born, the future Elizabeth I, another daughter and not the male heir Henry wanted. Anne’s frantic attempts to bear Henry a son ended in miscarriages, and a disappointed Henry sought comfort in a new mistress.

Anne panicked and, increasingly insecure, entered into a number of court intrigues. A temporary reconciliation with Henry led to another pregnancy, but Anne had a still-born son in January 1536. Her time was running out, and Henry was already turning his attentions to her successor, Lady Jane Seymour.

Anne, brilliant and ambitious, was also arrogant, and had made some very powerful enemies at court. Thomas Cromwell began to compile evidence to charge her with high treason, and the politically astute Howards – with the exception of her brother George – turned against her. Cromwell amassed, with judicious use of torture, a number of witnesses who swore to her adultery, and Anne was committed to the Tower on 2 May 1536.

Her brother George was also arrested, and both Anne and George were tried in the Tower on 15 May. Two days later, George and four other supposed lovers were executed. On 19 May, Anne was executed in the Tower; in recognition of her rank, she was assigned a sword-wielding French executioner rather than the customary English axe.

Known as ‘Anne of a Thousand Days’ her brief reign as Queen Consort had ended in tragedy. But her daughter Elizabeth went on to become one of England’s best known and most successful monarchs.

Late 16th-century portrait of Catherine Parr by an unknown artist.

Famously the sixth wife of Henry VIII, who survived and outlived the king, she was also the English queen consort who had the most husbands – four in total.

She was the daughter of Sir Thomas Parr, an official in the royal household. When she was just 16 she was married to a rich older man, Sir Edward Burroughs, who died the next year. At the age of just 17 she married another elderly man, a widower named John Neville, Lord Latimer, who already had several children. She proved an excellent stepmother and wife, nursing her husband through his final illness, and was left a wealthy widow after 13 years of marriage.

At this point Catherine, who was intelligent, well educated and level-headed, fell in love with the charming, feckless Sir Thomas Seymour, the uncle of the heir to the throne, Prince Edward. He may well have been in pursuit of her fortune, but nevertheless they were betrothed.

However, this plan was foiled by Henry VIII. It was a year since the execution of his previous wife, Catherine Howard, and he was ready to marry yet again. After the disappointments of his previous marriage to the flirtatious, giddy Catherine Howard, Catherine Parr seemed like a paragon of virtue – well-read, sober, steadfast. He despatched Sir Thomas abroad as an ambassador, and claimed her as his sixth wife and they were married on 12 July 1543, when she was proclaimed queen.

With Catherine as queen the court was transformed, becoming a centre for scholars and intellectuals. Catherine even published her own book, Lamentations of a Sinner. Miraculously, she managed to survive the plotting and machinations of the court faction let by Archbishop Gardiner and the Duke of Norfolk.

Henry was sickening and when he died on 28 January 1547, Catherine was left well provided for in his will, and given her precedence at court, but was not named protector and Regent to King Edward. Finally her chance had come to marry Thomas Seymour – the ceremony took place in secret just four months after Henry’s death.

She soon realised that her charming husband was a rake and a flirt and that she could not expect his fidelity. At the age of 36 she was pregnant for the first time, but she died – along with her daughter – a few days after a long and difficult labour on 7 September 1548. Her husband, caught up in a fatal feud against his brother, was executed just six months later.