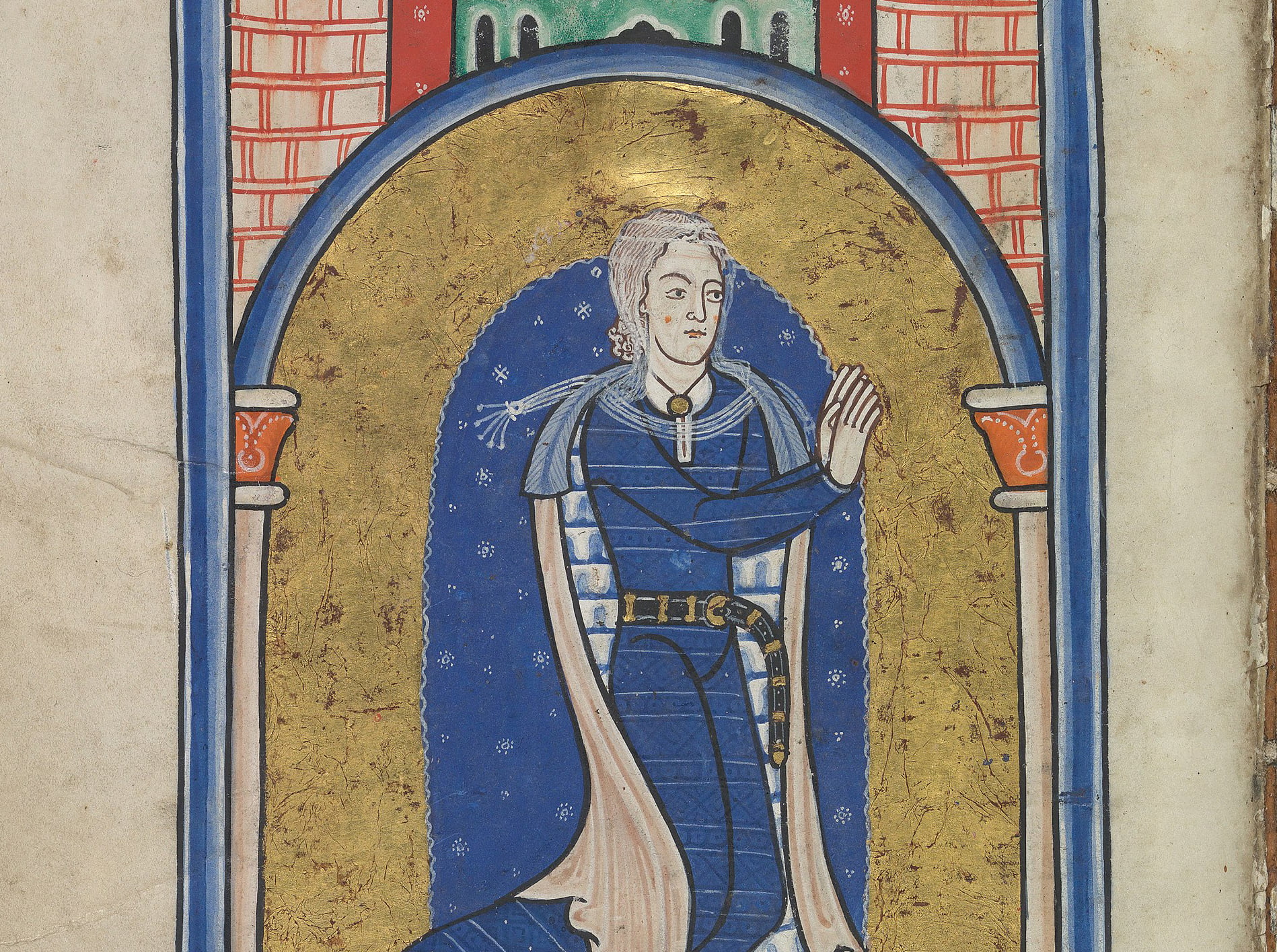 One of the most powerful and influential women in the Middle Ages, Eleanor inherited a vast estate at the age of 15, when she became Duchess of Aquitaine. She had the distinction of being queen consort twice: firstly, as queen consort of France (1137–52) and secondly, after the failure of her marriage to King Louis VII of France, when she married her third cousin, the Duke of Normandy, who later became King Henry II of England.

Eleanor was beautiful, lively and amusing, not really a suitable match for her pious first husband, Louis. When he went on a Crusade to the Holy Land, Eleanor decided to join him, bringing along her own retinue of high-born ladies as female crusaders. Inexperienced and demanding, the ladies slowed down the progress of the Crusade and were a massive distraction to the young crusaders.

When Eleanor reached the Holy Land she embarked on a scandalous affair with her uncle, Raymond of Poitiers. Deeply unhappy in her marriage, when Eleanor met Henry Plantagenet, who was eleven years her junior and about to be crowned king of England, she fell in love with him. She consented to having her marriage to Louis dissolved, on the dubious grounds of consanguinity.

Eleanor was 30 when she married Henry, and by the time she was 45 she had borne him five sons and three daughters. While she remained faithful to her husband, Henry went on to have multiple affairs, which she accepted with equanimity. However, when her husband fell for Princess Alice, the daughter of her ex-husband Louis, who was betrothed to her third son, Richard of England, Eleanor feared she was becoming a public laughing stock.

In 1173, encouraged by Eleanor, her sons mounted a revolt against their father, which backfired. Henry imprisoned Eleanor in Winchester Castle, and started to live openly with Alice. Eleanor endured 16 years of imprisonment until Henry’s death in 1189. Aged 70 when she was released, she embarked on a whirlwind of activity, organising her children’s marriages and cementing alliances. She became regent of England in all but name when King Richard left for the Crusades. When Richard fell into the hands of his enemy, the Duke of Austria, Eleanor had to scrape together an enormous ransom to secure his release.

After Richard’s death in 1199 Eleanor managed her greatest diplomatic triumph, patching up English relations with France. She even managed to lead the charge against her grandson Arthur of Brittany, a contender for the English throne, and defended Anjou and Aquitaine. When King John of England, her arrogant and misguided son who had always been her favourite, had the captive Arthur killed, Brittany revolted and captured Normandy, which was lost to England. Shortly afterwards, the extraordinary Eleanor died, aged 83. 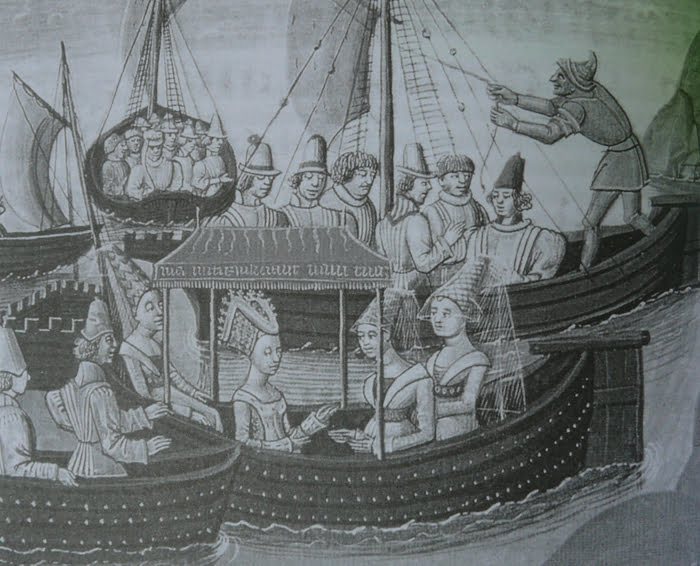 Philippa of Hainault and her family seated under the canopy as they cross the English Channel.

The Flemish daughter of Count William of Hainault, Philippa was betrothed to Edward III of England when she was just 12. She married him, aged 14 in 1328, a year after he had become king, following the deposition of his father Edward II by his mother, Isabella of France, and her lover Roger Mortimer.

Philippa and Edward had their first son, Edward, in 1330. At this stage Mortimer was the de facto ruler of England. Edward led a coup against Mortimer, who was executed, and Edward’s true reign began. Philippa faithfully followed her husband as he made his bid for the French throne, beginning the long agony of the 100 Years’ War. She travelled with him on his regular campaigning trips to the continent.

She was thrust into a martial role in 1346 when Edward, and their son the Black Prince, were engaged in winning the battle of Crécy and besieging the port of Calais. King David of Scotland took the opportunity, while King Edward’s back was turned, of invading England, a distraction that would surely assist the beleaguered French king. Extraordinarily, Philippa was given the job of leading a 30,000-strong army to Neville’s Cross near Durham, where David was defeated and captured.

Fresh from her victory, Philippa set off for France where she found her husband, who had finally managed to take Calais, in a towering rage with its citizens. He had taken six burghers prisoner and planned to execute them. Philippa thought this was a senseless plan and pleaded with her husband: “Gentle sir, since I have crossed the sea with great danger to see you I have never asked you one favour. Now I most humbly ask as a gift to the Son of the Blessed Mary and for your love of me that you will be merciful to these six men.” Philippa prevailed and the six burghers were reprieved.

However, Philippa was increasingly debilitated by the behaviour of her husband, who was extravagant and repeatedly unfaithful. There was increasing strife in her family and many losses of much-loved children. Depressed and suffering from incurable dropsy, she died in August 1369. At the time Edward was captivated by his current mistress, Alice Ferrers, but after Philippa’s death he went into a sad decline. His remaining sons, enraged by his infatuation, turned against him, and he died alone in 1377.